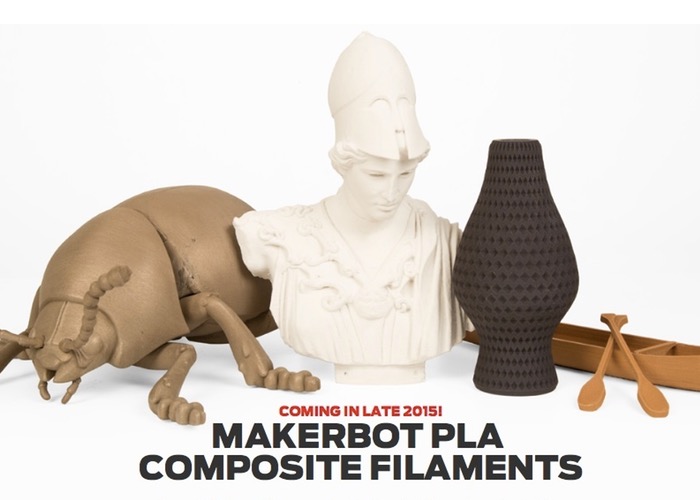 During the International Consumer Electronics Show (CES) 2015 this month 3D printer manufacturer MakerBot has unveiled a range of new 3D printing filaments it has created for its range of MakerBot Replicator 3D printers.

The new 3D printing filaments take the form of PLA composite materials that are made with the inclusion of real Metal, Stone and Wood. Providing users with the ability to print realistic yet highly stable 3D prints with more natural finishes.

Together with Bronze a polishable material can result in shiny objects and Iron that prints can be magnetised or presumably develop a rusted surface. MakerBot explains a little more about the new filaments :

“These new filaments bring 3D printing closer to the look of a finished product, yet retain the nontoxic and ease-of-use properties that make PLA such a popular 3D printing material. With MakerBot PLA Composite Filaments, the exciting potential of the swappable MakerBot Replicator Smart Extruder will also be realized, as new Smart Extruders are developed to match the new materials.”

As well as unveiling their new 3D printer elements MakerBot has also unveiled a number of new additions to their services and accessories, but did not unveil a new 3D printers this year at CES 2015.

MakerBot also announced a new feature called the MakerBot Mobile True Remote Printing and Monitoring. For more information on all the new arrivals within the MakerBot range of products and services jump over to the official press release at Business Wire via the link below.