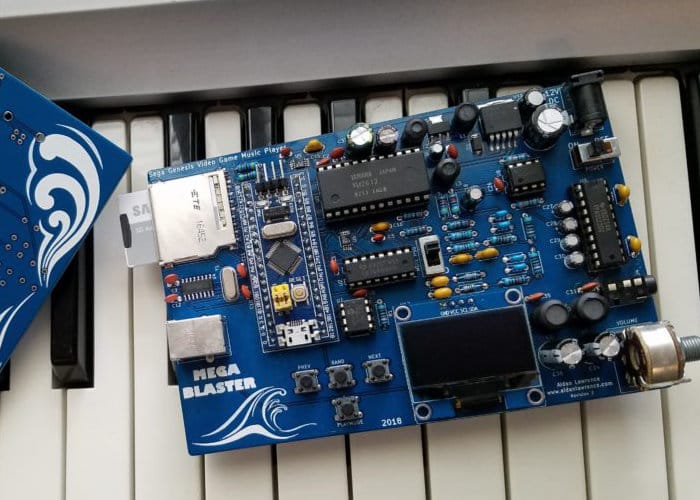 MegaBlaster is a video game music player project created by Aidan Lawrence, this week Aidan has published an update announcing that he has created an official PCB for the Genesis player. Watch the video below to learn more about the hardware and the results you can expect from the Sega Genesis video game music player.

The board and YM2612 offer a 6-channel FM synthesiser IC that was most prominently featured in the Sega Genesis (AKA Megadrive) home video game console. The YM2612 was also featured in the FM-Towns home computer and the Sega C2 Arcade System. Aidan explains more about the project and the video game music player he has created using the YM2612 which also had a CMOS alias that is functionally identical, named the YM3438.

“This is (probably) the last instalment of my series of Sega Genesis video game music players. This player features it’s own stylised PCB and significantly improved mixing and amplification compared to it’s predecessors. It’s also based off of the extremely affordable STM32 “Blue-pill” platform.

The SN76489 is a 3-channel + 1 noise channel programmable sound generator (PSG) that was popular with several early video game systems and home computers. Most notably, the SN76489 was featured in the Sega Master system, the predecessor to the Genesis. To allow for backwards compatibility, Sega included a clone of the SN76489 in their new Genesis consoles. Programmers and sound designers could leverage the SN76489 to add three more square wave channels to the YM2612’s 6-channels of FM synth, creating 9 channels + 1 noise channels in total.

The music you hear from this player is NOT emulated or prerecorded. It is synthesized in real time on genuine sound chips (YM2612 & SN76489). You are hearing Genesis music straight from the source with a significantly better amplification circuit, making this music crystal clear! All of these designs and more are completely open-source, of course. Feel free to make one yourself!”

For more information jump over to the Aidan Lawrence Github by following the link below for more details and instructions on how to create your very own.