LG has launched a new Android smartphone in Korea, the LG Optimus Z. The LG Optimus Z features a 3.5 inch WVGA ‘Hyper’ HD LCD display with a resolution of 800 x 480 pixels and comes with a 1GHz Qualcomm Snapdragon processor.

The LG Optimus Z launches with Google Android 2.1 (Eclair) but it will be updated to Android 2.2 (Froyo) before the end of the year. 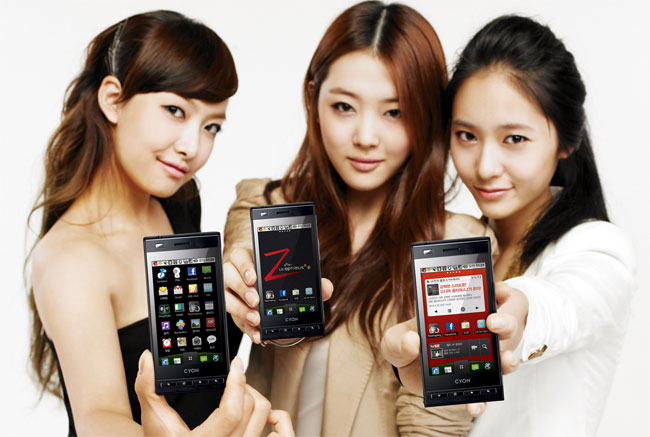 There is also a five megapixel camera, T-DMB mobile TV, which is only available in Korea, a 1,350mAh battery, you can see full details in the press release below.

With the 1GHz Qualcomm Snapdragon at its core, Optimus Z is being launched with Android OS 2.1 with the option to upgrade to Version 2.2 before the end of the year. Advanced multimedia options include 3.5 inch WVGA “Hyper” HD LCD (800 x 480 pixels), Korea-specific T-DMB mobile TV, 5 MP camera, Dolby Mobile and DivX compatibility. Optimus Z comes with two 1,350mAh batteries, good for hours and hours of talking or entertainment. And at only 11.05 mm thin, Optimus Z and its unique “Zstyle” design is more angular than previous LG smartphones and its matte-finish metal gives the Optimus Z a solid, durable feel.

In a first for Korean smartphones, the LG Optimus Z offers On Screen Phone function that lets user display their phone interface on the screen of their PC. Using Bluetooth or a data cable, the interface will appear onscreen, letting users manage the phone’s various functions – including applications and e-mail – on the computer. In addition, any documents, images or music files stored on the PC can be easily transferred to Optimus Z using this interface. Furthermore, Drag & Shake allows LG Optimus Z users to share files between smartphones with a simple shake of the handset, while LG Air Sync lets them constantly sync the phone with their PCs or other mobile digital devices.

The LG Optimus Z comes pre-equipped with more than 100 of the most popular applications in Korea, along with 70 more that are not available in the Android Market. . LG has signed a long-term agreement to become both a Global Partner of Formula 1™ and a Technology Partner of Formula 1™. As part of this top-level association, LG acquires exclusive designations and marketing rights as the official consumer electronics, mobile phone and data processor of this global sporting event. For more information, please visit www.lg.com.