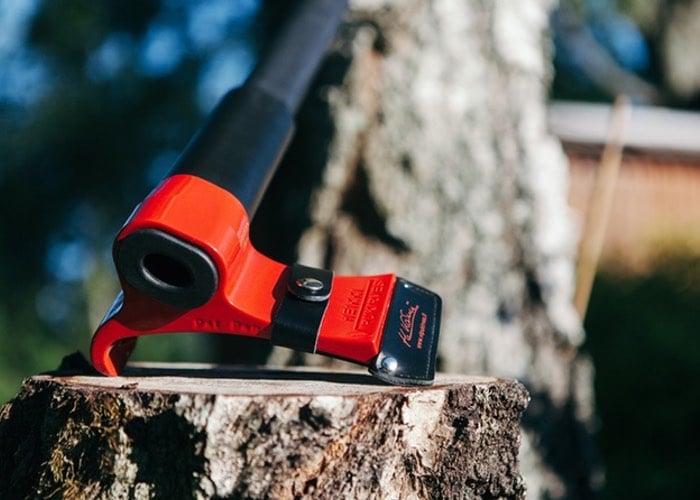 The design of the axe has remained the same for many years but now one intrepid team of axe users have redesigned the humble axe to be smarter and easier to use, in the form of the Leveraxe.

Leveraxe is a smart wood splitting axe that requires far less force than a traditional axe and is also much safer to use. Watch the video below to learn more about the Leveraxe’s unique design.

The Leveraxe project is currently over on the Kickstarter crowd funding website looking to raise $150,000 in pledges to make the jump from concept to production. Its creators explain more abut the design and its function.

We have totally reinvented the oldest tool known to mankind. Leveraxe is a smart wood-splitting device. It is simply clever! Leveraxe is based on a lever mechanism and rotational action. The head is attached from the side, not the center, which alters its center of gravity.

After you hit a log, Leveraxe head will break in few millimeters and then stops. At the same time counterweight on the right side of the head forces the axe to fall sideways, splitting the log apart with ease. Because of that Leveraxe can handle all common hardwood.

We are currently working together with top manufacturers to produce the new version of Leveraxe. However, to produce on a larger scale we require expensive production tooling. Please help us fund our project and be part of this historical adventure of reinventing the oldest tool known to mankind – lets make it happen together!

So if you think Leveraxe is something you could benefit from, visit the Kickstarter website now to make a pledge and help Leveraxe become a reality.