Are you a Gandalf or an Optimus Prime? A wizard or a robot? Or maybe a giant reptile, perhaps? Such are the many personalities found in a Geek Zodiac conceived by James Wright and rendered by artist Josh Eckert. It occured to both that rather than use millenia-old designations for charting our fate and personalities, why not create a specific variety of tailor made archetype for the geek set? 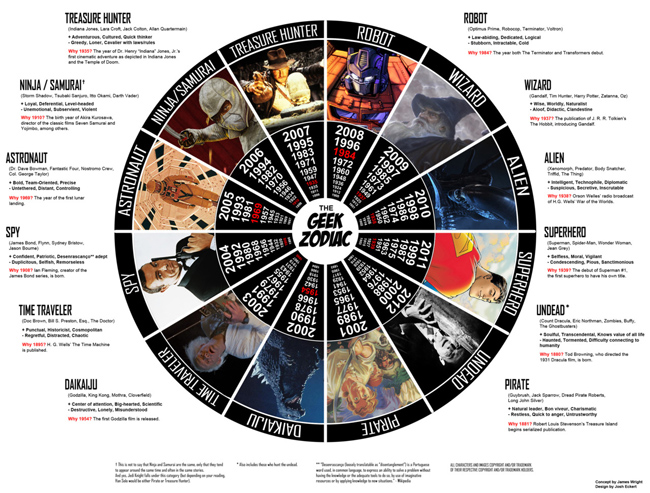 We have to admit, the Ninja/Samurai part is a bit too corny. Where’s Darth Vader? The same ‘traits’ fits him better than Ninjas. The Undead don’t make sense either, since zombies and vampires are for the trendy hipsters.Serial killers like Jack Nicholson from the Shining and Hannibal Lecter would have put more flare in the pie chart. Their traits would be devious, unpredictable, eccentric, and creative.

This probably settles the age old question whether zodiacs matter or not. The Geek Zodiac is fun, but not very substantial.