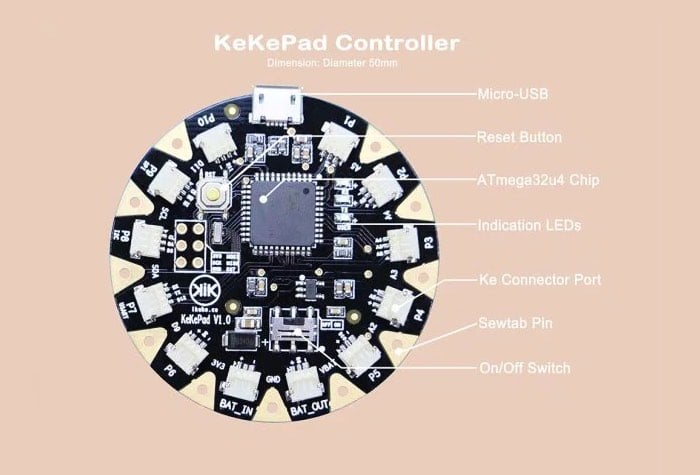 Makers, and developers creating wearable projects might be interested in a new piece of hardware called the KeKePad which offers a handy alternative to using conductive thread.

KeKePad has been co-designed by Michael Yang and is an Arduino compatible platform that includes a variety of sewable modules designed to be as small as possible and connect together using specially designed cables called Ke Cables.

Sensors are also available to expand your project and include light, sound, temperature, humidity, and acceleration modules, as well as actuators to use LEDs, vibrating buzzers and other similar hardware.Yang explains more about the inspiration behind KeKePad after using the Arduino Lilypad :

Using conductive thread as the wires in electronics is a fresh idea, but there are some obvious drawbacks.

Yang explains these include the conductive thread having no insulation, using needles with the thread also causes problems and can break-up the thread in some instances and for tight connections to the Lilypad connections need to be soldered in place, meaning that parts can’t easily be removed if needed.

KeKePad is a new generation of wearable and e-Textile platform, it uses super thin & flexible Ke cables to replace conductive thread.
Ke cable is the thinnest 3-pin thread-like cable in the world (crimp terminal type)! Using KeKePad platform, you can build electronics into your clothing easily, quickly and seamlessly! KeKePad – Perfect for building wearable and e-textile projects in minutes!

KeKePad are tiny and sewable! No conductive thread and no soldering, it’s plug-and-play, easy-to-use and open source with various codes supported! It’s timesaving and help you to focus on creation.