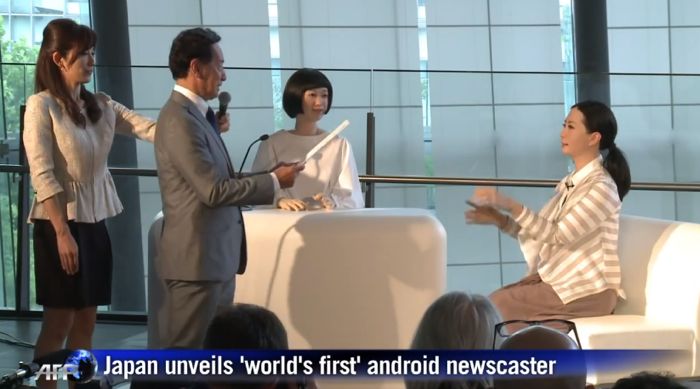 We have seen robots do various things, and now the worlds first Android News Reader has been announced in Japan. It was created by Professor Hiroshi Ishiguro at the Miraikan National Museum of Emerging Science and Innovation in Tokyo.

The video below shows this robot news reporter in action, and the robots will be shown off at Tokyo’s National Museum of Emerging Science and Innovation.

Both androids will work at Tokyo’s National Museum of Emerging Science and Innovation, interacting with visitors to collect data for Ishiguro’s studies into human reactions to the machines.
“We will have more and more robots in our lives in the future,” Ishiguro told AFP.
“You can take my androids on planes — the torso in the suitcase and the head in carry-on.”
Ishiguro has a humanoid version of himself which he sends overseas to give lectures.
“It cuts down on my business trips,” he said. “Technical advances mean robots look and act more human, and that makes us think about our worth.”

You can find out more information about this Android news reporter over at the AFP website at the link below, I wonder if we will be seeing these robots news reporters appearing on our TVs some time in the future.