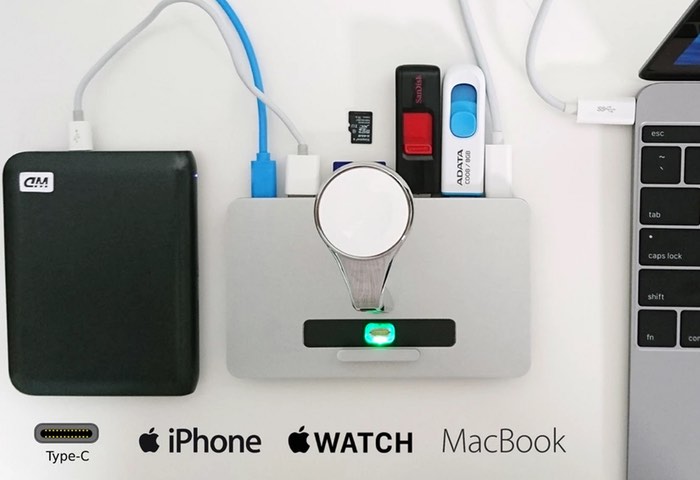 If you own a variety of different Apple hardware you might be interested in a new USB-C hub which comes with its own integrated magnetic charger, called the iStand.

iStand has been designed to sync and charge all devices and provides connectivity for Apple’s iPhone, Watch and new MacBook systems that come equipped with the new USB-C connection.

Watch the video below to learn more about the inspiration behind the iStand as well as learn more about its features and functionality. iStand Has taken to the Kickstarter crowdfunding website this month to raise the AU$30,000 it requires to go into production. Its developers and creators explain a little more.

iStand is a beautifully designed multi-functional power docking station that provides a solid foundation for iPhones and Apple Watches, as well as support for the new MacBook, Kindle, iPad, and other USB enabled devices. It is the first dock to include an integrated charger specifically for the Apple Watch, and uses the same magnetic technology as the Apple Watch charging cable.

iStand has three integrated USB charging and Data Syncing ports for the iPhone and Apple Watch plus an additional port at the back to charge other USB Devices such as an iPad or Kindle. Thanks to the iStand USB-C Smart Hub, the USB-C port easily converts into three USB ports, an SD card reader and a Micro SD card slot.

The iStand is now available to back via Kickstarter with pledges starting from just $69 for early bird backers, but only limited quantities are available so don’t delay if you think this is something that your Apple devices could benefit from.