One of the most impressive pieces of technology ever produced by the United States and partner nations is the International Space Station. There are number of astronauts who live for months or weeks at a time and their lives depend on the condition of the space station around them. With that in mind, NASA and crew members aboard the space station where understandably concerned last week when white flakes were seen floating into space from one of the solar panel arrays that provide power to the space station. 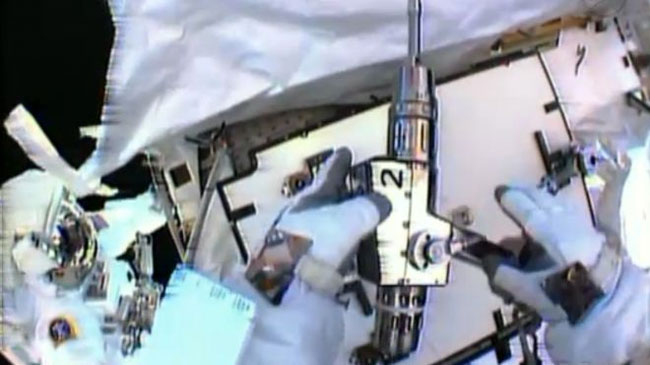 NASA was able to determine that the white flakes astronauts saw floating away into space were frozen flakes of ammonia. Ammonia is used on the space station to cool the massive solar power generation system. In order to fix the ammonia leak, astronauts went on a long spacewalk on Saturday as they attempted repairs.

According to NASA mission control, the leak appears to have been fixed during the spacewalk but additional monitoring over the coming weeks as required. One NASA official says it will take “a good four weeks, five weeks, maybe even a few weeks longer” to determine for sure that the leak has been repaired. The spacewalking astronauts installed a new pump after they removed an old one that was suspected to be the source of the leak. During the repair, the astronauts discovered no clear indication of what exactly caused the leak to begin with.