It will more than light your cigarrette, that’s for sure. That’s right, a pony breathing napalm. Actually it’s just fire, plain and simple. Perfect for roadside ambushes to take on the occupiers! It’s a pony after all--who’d shoot a pony? Besides, IEDS are just so 2005! Okay wait, it’s not like we’re encouraging nefarious guerilla tactics in your neighborhood, but what else is a fire-breathing pony good for? 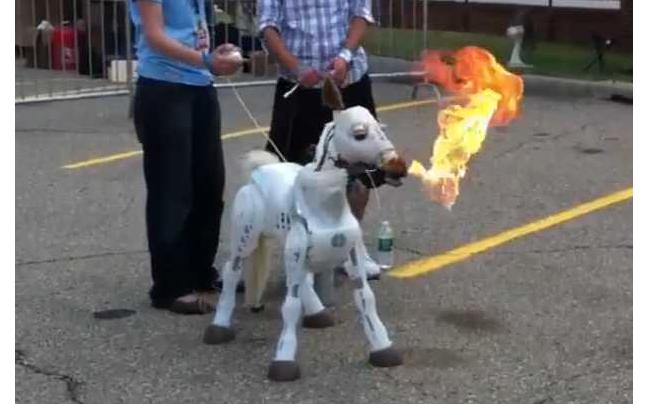 While no magicry went into this particular project that debuted at Maker Faire in Detroit, we must confess to admiring the ingenious Wii hack that allowed its makers to weaponize an animal long considered benign to a fault.
It’s not a real animal, however, just a toy prop of convincing proportions. Now if only it were 100% mobile and blessed with AI. Oh no, wait. That doesn’t seem to be a good idea.
Having mentioned good ideas, here’s a video of the firebreathing pony in vivid action:
Watch this video on YouTube.
Not sure yet if an entire production line of these ponies will ever be deployed in a battlefield near you. But remote controlled drones are awful popular these days, so who knows?
Source Boing Boing