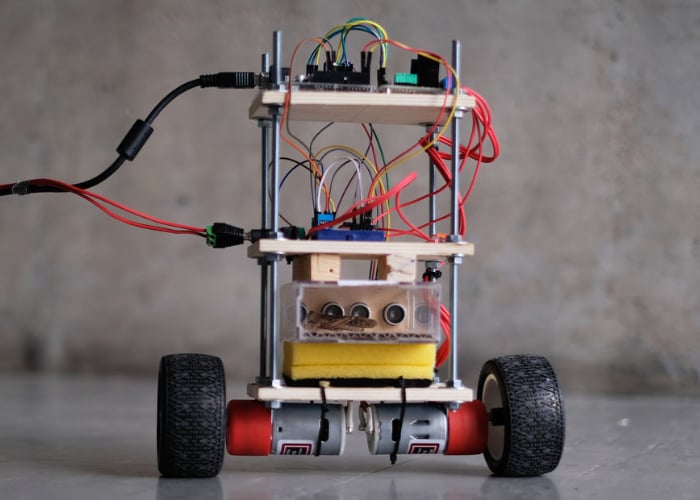 DIY self balancing robots are nothing new but Grzegorz Lochnicki and Nicolas Kubail Kalousdian have pushed the simple robot to its next level by creating the Augmented Arthropod. The project has also been kindly published to Instructables allowing you to build your very own insect piloted robot and offering a great insight into the mechanics and technology required for a self balancing robot to function correctly.

The structure for the build consists of three platforms separated on threaded rod and a pair of standard DC gear motors. The build is powered by an Arduino Uno, a BNO055 IMU, and an L298N motor driver. Check out the video below to learn more about the robot created by by Grzegorz Lochnicki and Nicolas Kubail Kalousdian and read more about the inspiration behind the unique self balancing insects piloted robot.

“Sixty percent of the human population is already augmented. Internally, through biological modifications, and externally, through modular exoskeletons. The biodiversity of the world shrinks as the gap between species grows. However, in the fringes of society, there is an idea permeating the minds of the populace. Some believe that bio-diversity is already a thing of the past. Dead. Others believe that through augmentation and artificial adaptation evolution can be altered from a natural process to a cybernetic one…

Governments have been augmenting various animals for espionage and warfare for at least five decades. In an attempt to secure the data developed from these experiments, they saved it outside of the grid into an archaic physical form, a solid state drive. The data you are about to witness was recovered from such a drive. It is believed that this drive was en-route to a low orbit server station, XXX. However, it seems that it never reached its intended destination. Burn marks on the drive’s capsule indicate that there was a malfunction on the autonomous delivery drone that carried it.

It was lost to the whims of the earth’s orbit. Until now. The manuscript you are about to read was found deep in the emergent rain-forest of Siberia. Some critical parts of the experiment’s results are missing, however, most of instructional data remains intact.”