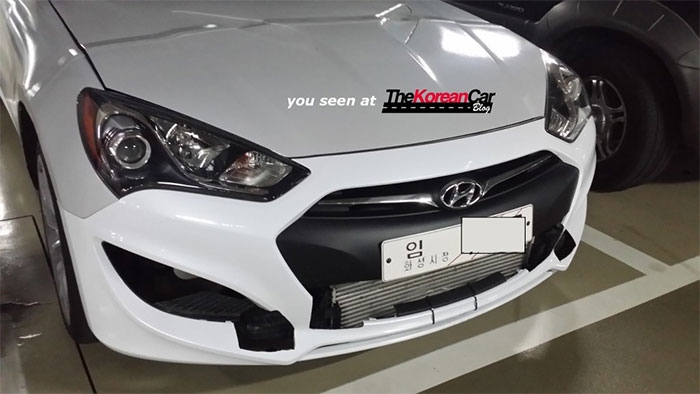 Over the last few years Hyundai has moved from being a company who made cheap cars to a company that makes cheap cars, but has more than a few nice automobiles as well. One of the more popular sporty cars from Hyundai is the Genesis and a new version of the Genesis that packs some serious power under the hood was spied recently sitting in a parking garage in South Korea.

The photographer claims that the car was wearing a sticker on the windshield that said, “test car – 3.3T 8AT AWD.” If you don’t speak car geek that would mean a 3.3L twin-turbo engine with 8 speed automatic transmission and all-wheel drive. Those specs have been rumored before.

In fact, the CEO of Hyundai in the US has said in the past that the twin-turbo engine would have the same sort of power as the 5.0L V8 Hyundai uses in the Genesis now, but would weigh significantly less. Putting all that power to the ground via AWD will certainly help acceleration numbers and grip in harsh conditions. The new Genesis packing the 3.3L twin-turbo isn’t expected until the 2017 or 2018 model year.

via The Korean Car Blog