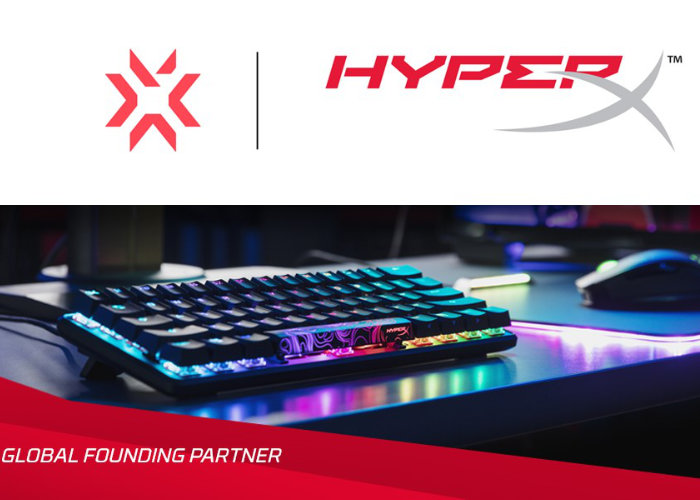 Hyper X has today announced they have become a founding partner of Riot Games’ Valorant Champions Tour. The deal will see HyperX become the official sponsor for gaming keyboards, mice and mousepads. “We’re excited to welcome our newest partner to the VCT. HyperX joins us as the Official Keyboard, Mouse, and Mousepad Partner of the VALORANT Champions Tour,” said Naz Aletaha, Head of Global Esports Partnerships and Business Development at Riot Games. “We couldn’t be more thrilled to welcome them and have their amazing products supporting our event in Reykjavik and beyond.“

VALORANT quickly established itself as the fastest-growing esport of 2020. To support the competitive scene, Riot Games launched the VALORANT Champions Tour, a year-long, global circuit featuring three levels of competition: Challengers, Masters, and Champions. Teams compete through regional Challengers events, then qualify into international Masters events, with the goal to earn a spot at Champions. In this two-week-long tournament, one team will be crowned the VALORANT Global Champion. The season-long competition tour will feature competitions in North America, South America, Europe, Asia, and Australia.

“We are thrilled to be partnering with Riot Games’ Valorant Champions Tour”, said Jessany Van’t Hoff, Head of Global Gaming Partnerships, HyperX. “ In almost two years, VALORANT has amassed a huge community and has now evolved into a global esport tournament. For over a decade, HyperX has sponsored pro esports teams and tournaments. Our experience and knowledge have become embedded into the development of our award-winning line up of gaming peripherals, including the Alloy gaming keyboards and Pulsefire gaming mice. We are excited to continue this tradition and ensure all players play better with HyperX”.