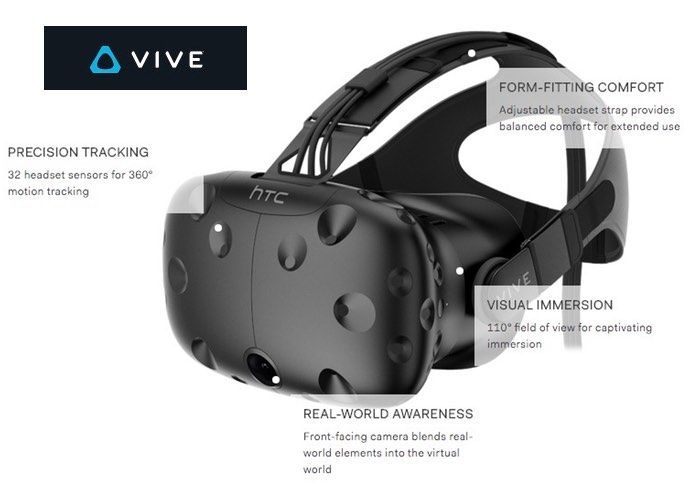 If you have been patiently waiting for Valve and HTC to announce the launch of their new virtual reality headset you will be pleased to know that this week the companies have confirmed that the HTC Vive VR headset will be launching on April 1st, 2016 and will be priced at $799.

HTC Vive VR preorders will start next week from February 29th and the price puts it $200 clear of the recently launched Oculus Rift which will be shipping to its first consumers during March 2016 and is priced at $599 and was made available to preorder during January of this year.

The HTC Vive VR headset will be available in 24 countries at launch, including the US, Canada, Australia, New Zealand, China, Japan, Taiwan, and a number of European countries. HTC explains more in today press release :

The countdown has begun and is ticking away toward 10 a.m. Eastern time on Monday 2/29 at which time pre-orders will open worldwide with pre-order fulfillment and full commercial availability starting early April 2016. Vive will be delivered as a complete kit allowing users to instantly jump into a fully immersive virtual environment using two wireless controllers, 360 degree tracking and room scale movement sensors.The integration of SteamVR into the bundle ensures that all Vive equipment is kept up-to-date with the latest features.

Featuring a state-of-the-art headset, two wireless controllers, and room-scale motion tracking. See, hear, and experience worlds beyond imagination. Vive is brought to you by HTC and Valve. Uniting passion, talent, and innovation, Vive delivers on the promise of VR with best-in-class technology and content.

For more information on the new HTC Vive VR headset jump over to the official website for details via the link below.