We’ve seen HTC One Max getting leaked in great detail in the past few weeks. Every single detail of the device has been leaked, and the handset was recently spotted at the FCC. Now, some more images of the purported HTC One Max have been leaked from Taiwanese shores, showing us the purported device with a removable back.

The images surfaced from a Taiwanese site ePrice, the same folks who leaked the handset in great detail in the past as well. Additionally, the image also compares the purported HTC One Max with Samsung Galaxy Note 3 and shows that it’s a little bigger than Samsung’s phablet. 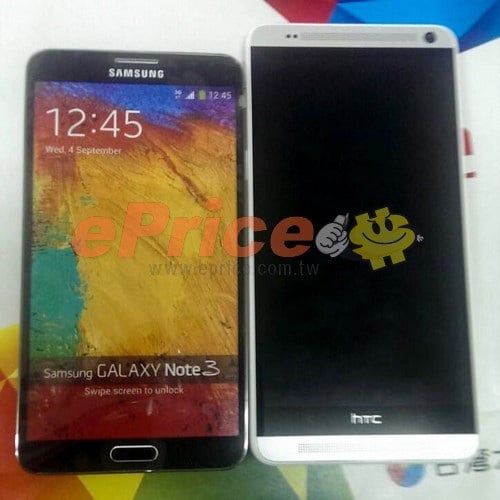 Rumors suggest that HTC One Max will feature a 5.9-inch full HD display boasting a resolution of 1920 x 1080 pixels, a quad-core Snapdragon S4 Pro processor, 2GB RAM, 16GB storage with a microSD card, 3,300 mAh battery, a fingerprint scanner at the back and will run Android 4.3 Jelly Bean out of the box.

The handset is rumored to launch on October 17th at a press event, but there’s no official word from the folks at HTC.