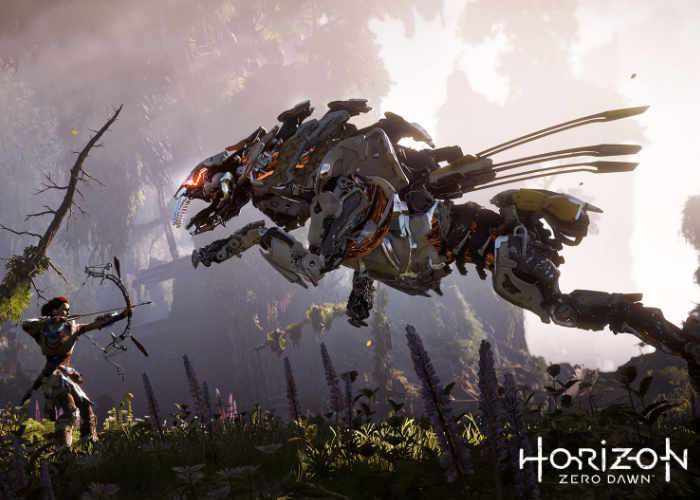 If like me you are patiently waiting for the launch of the new Horizon Zero Dawn open world role-playing game to hit the PlayStation platform, you may be interested in this latest trailer which has been released to whet your appetite for its launch in a few days time.

Horizon Zero DawnWill be officially launching on February 28th, 2017 and is exclusively available on the PlayStation 4 and PlayStation 4 Pro. Check out the latest Horizon Zero Dawn: Building the World teaser trailer below to learn more about what went into creating the games environment and creatures.

Horizon Zero Dawn is an action role-playing game played from a third-person view. Players take control of Aloy, a hunter and archer, as she progresses through a post-apocalyptic land ruled by robotic creatures known simply as “Machines”. Machine components, such as electricity and the metal they are composed of, are vital to Aloy’s survival, and she can loot their corpses to find useful resources for crafting.

Aloy uses a variety of ways to kill enemies, such as setting traps like tripwires using the Ropecaster, shooting enemies with arrows, using explosives, and melee combat. Weaponry and traps may be purchased from traders. Further, she is essentially able to hack a selection of creatures with the Override Tool, turning them into makeshift vehicles or travelling companions. Aloy can also hide in foliage and ambush nearby enemies to ensure immediate takedowns.

A “focus scan” allows Aloy to determine her enemies’ susceptibilities, identify their location, the particular level they possess and the nature of loot they will drop. There are three categories in the skill tree—”Prowler” concerns stealth; “Brave” improves combat; and “Forager” increases healing and gathering capabilities.