Actually, calling it a Taser rifle is a bit misleading. But out of all the stun weapons that have been built in the last few decades, the Maul comes closest to a full-fledged electric rifle. Then again, the Maul module isn’t a non-lethal weapon either. Confused? Don’t be.

What its Australian manufacturer wants to accomplish with the Maul is the ultimate law enforcement, close quarters weapon. It’s ideally a shotgun but also a stun gun when loaded with special incapacitating rounds. Allow us to explain in depth. 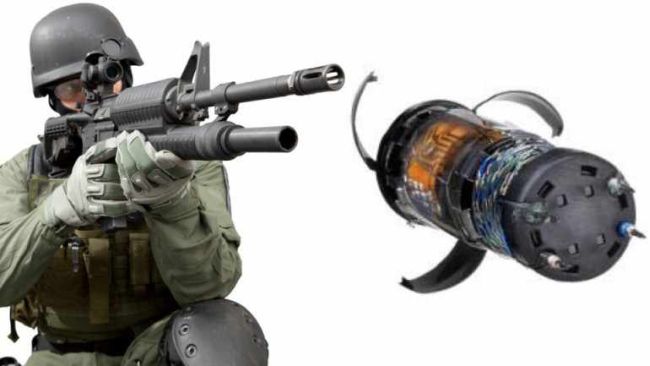 The Maul system is a super modular firearm that can fire a variety of ammunition, from lethal to stuff that blows you down. Pictured above, however, is the Maul system at its sweetest. Attached underneath an M4 carbine, the Maul is also capable of firing Xrep rounds. Electrically charged, they literally stun the target with excruciating voltage.

Thanks to a collaboration between Taser International and Metal Storm (an company known for its badass guns), the Maul is being marketed as the ultimate in deterring bad guys. Its customers, of course, are your friendly neighborhood constabulary. The Maul is also engineered for multiple configurations, be it a stand alone carbine or a pistol.

So instead of a Buck Rogers type weapon, the Maul module is the closest yet to the Lawgiver. You know, that super-pistol Judge Dredd uses?