343 Industries has announced that a new Halo 4 map pack : Majestic will be launching and available to download via Xbox Live on February 25th 2013, for all Halo 4 fans to enjoy. 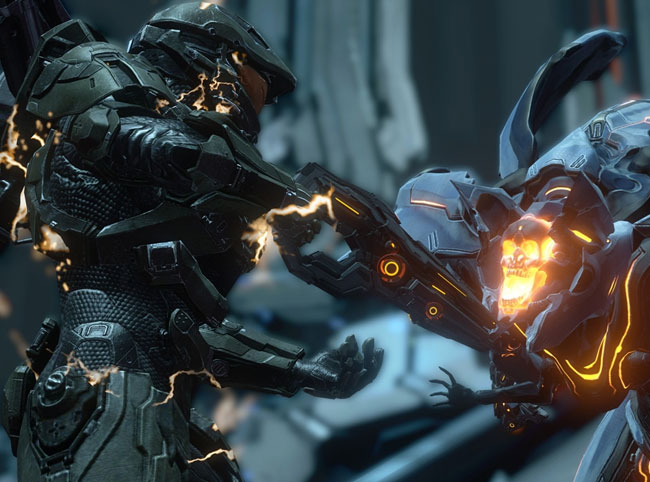 As well as three new maps within the Halo 4 Map Pack Majestic, the new map pack will include a new free-for-all game type called Infinity Rumble, that will  be exclusive for a limited time to the the Majestic DLC playlist, and include ten new Achievements worth a total of 250 Gamerscore.

Landfall: A shining city under attack – The world of Tribute is now a graveyard, but its capital was once a bright beacon of commerce among the inner colonies. Fight in the corridors and courtyards of Casbah’s port authority buildings, but don’t stand still too long. Perfect for Infinity Slayer, this small to midsize asymmetrical map offers interiors with sparse cover, which encourages close-range combat, while the exteriors offer long lines of sight to stalk your opponents. Awesome jump routes let players spring around the outside of the map, incidentally offering a perfect view of the city as it is razed by the Covenant’s brutal assault.

Monolith: Adrift in a forgotten asteroid belt – This monument and many like it were built by the Forerunners after their final victory over the ancient humans. This small map has central man-cannons, short corridors, almost no cover, and open sightlines which make the location great for a mixture of close and mid-range battle. Monolith harkens back to more classic “Halo” arena-based maps, and its symmetry lends nicely to objective-based modes like Capture the Flag. Monolith is an open battlefield; wherever you look, you will witness the ferocious action that only a small and open map can provide.

Skyline: Combat analysts agree – The rooftop terrain on this new space tether construction site is an ideal training environment for close-quarters infantry combat. This map, perched high above the sights of reconstruction in Cascade’s capital city, is small and symmetrical, perfect for Regicide with a mixture of high and low spaces and plenty of cover. Don’t think cover means you’re safe, however – this map holds explosive fuel cells that can and will wreak havoc in Skyline’s confined spaces, not to mention the long, long drop if you misstep.

New Game Type: Infinity Rumble – Halo 4’s new game type, Infinity Rumble, is exclusive for a limited time to Majestic Map Pack owners and brings a few new twists to the War Games experience. It is a free-for-all game type where you can earn personal ordnance; all special medal and style kills help you earn ordnance faster, and you can also earn assists off of enemy players for even more medal points. You must carefully conserve and use your ordnance at just the right moment, or combine power-ups with power weapons in the race to be first. Every kill, and every death counts in Infinity Rumble, and this is reflected with a slower spawn time in the free-for-all matches.