Ever ridden a bike down a street only to have someone’s car zip by so fast, it almost threw you off the road? Instead of raising holy hell and expending energy shaking a fist in the air with righteous anger, go ninja and flick one of these magnets at the offending vehicle. 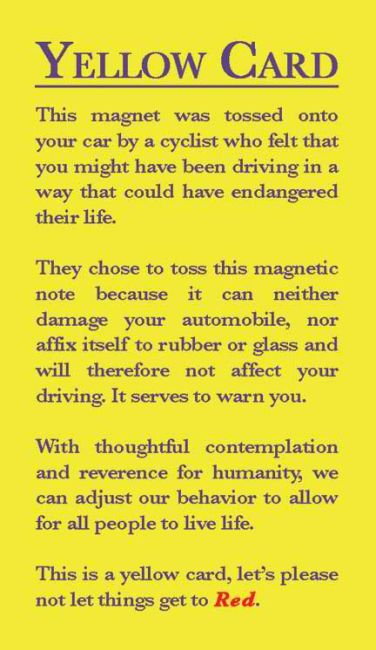 Cheeky, isn’t it? Sensible too. The card is a non-design designed by one Peter Miller (c’mon, it’s a yellow card—what’s there to design?) for cyclists who have the unfortunate bad circumstance to get almost killed by motorists. Rather than slap on windows and scream profanities, slap this message onto a magnet and hurl it at the target.

Of course, such action implies that the driver, once parked somewhere, will find the note and feel bad. We’re not sure about this, because drivers who find stuff stuck to their rides often get angry. Especially with such a worded message scolding them for their recklessness.

Still, it’s the gesture that counts: despite the risk to life and limb, civility must prevail. It’s better that the parties involved know they should be more careful on the road. Either this, or get into a fist fight, then drag the whole mess to court.