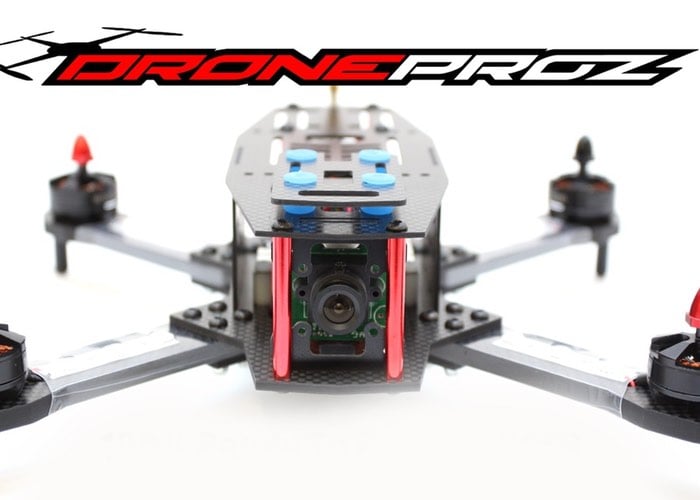 The first person view racing drone uses a display or virtual reality goggles to display the view from the on-board camera transmitting real-time footage, providing an immersive experience as though you are actually sitting inside the quad copter.

Watch the video below to learn more about this new project that is aiming to raise $10,000 over the next 27 days to make the jump into production. Its creators Droneproz explain a little more about the inspiration and design of their new FPV racing Gravitron V2 quadcopter.

FPV is a way to fly that a pilot uses either Monitor or goggles to view what the onboard camera of the quad is transmitting via a video transmitter in live time. Its the closest thing to sitting in a real plane and flying by what the unit can see. A lot of people relate it to a video game and when you try it for the fist time it becomes very addicting. Not all of us have the luxury of flying in a real plane every day so why not have the next best thing 🙂

The Graviton v2 is a unit that has been perfected ever since the initial release of our first Graviton. We have made this unit a lot more easier to fly and way more durable. We have also increased the flight time of the Gravtiron to 5-8 minutes depending on your style and up to 10+ minutes with an upgraded battery! The Gravitron has a top speed of 50+ miles per hour making the perfect unit to get your adrenaline going when looking for speed. The over all look of the initial Graviton hasn’t changed much but it has surely evolved to become one of the TOP racers in the industry!

Jump over to the Kickstarter crowdfunding website to learn more and make a pledge from just $399 for early bird backers.