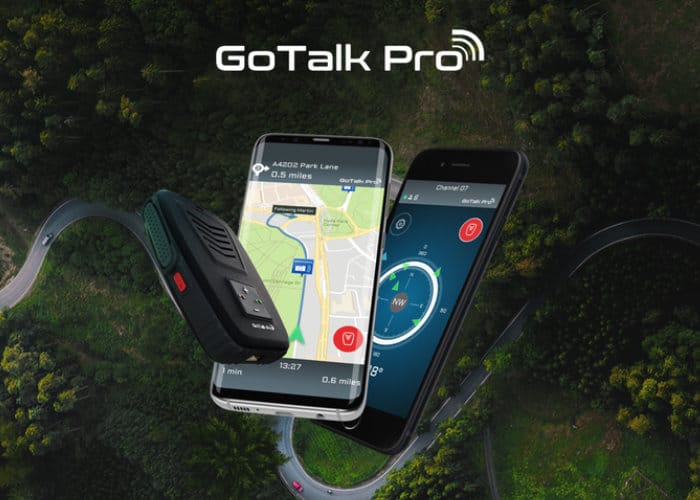 Team of engineers and developers based in London has created what they are calling the next generation of CB radio which is now being revived the modern twist and combines with a custom smartphone GPS application and comes complete with its own Bluetooth handset. Watch the video below to learn more about the GoTalk Pro communication system. GoTalk Pro has taken to Kickstarter this week to raise the £125,000 the team requires to take their concept into production. With pledges starting from £60 for early bird backers, the system is expected to start shipping, if all goes well via Kickstarter, during July 2018.

The team at GoTalk Pro explain more about the communication systems inspiration, design and technology.

We are combining GPS with full open-channel and limitless-range communication via mobile network. In other words our product is a fully functional sat nav that lets you talk with all other users. The GoTalk Pro team is reviving the idea of CB radio and giving it a modern twist to utilise the power of modern smartphones and the growing speed and coverage of mobile internet.

We offer a complete package – a rugged Bluetooth handset and a unique dual-interface smartphone app. GoTalk Drive is a fully functional sat nav app for all road users, offering all the ‘usual’ features along with the game-changing red ‘Talk’ button, which instantly lets you speak with everyone, anywhere without knowing their phone number or user name. It’s exactly like CB or HAM radio in the ‘old days’ or a walkie talkie kit but without any extra equipment or license and, most of all, without range limits and interference. Use GoTalk Drive to warn other drivers about dangers or speed traps, to get help or advice, or simply to chat about anything.

As proven in our tests, it completely changes the driving experience by giving traffic a ‘face’ – or a ‘voice’ – and creating a community rather than an angry bunch competing over every inch of the road. GoTalk Adventure – inspired by computer games – is an interactive compass. Using a form of a tactical map, it shows the location of other people on the same channel. A simple touch of the red button lets you talk with the whole group at once – perfect for any outdoor activity, such as paintball, cycling, or hiking, or for finding your friends in a large city crowd.

Jump over to the official Kickstarter campaign page by following the link below for a full list of all available pledges and full specifications.