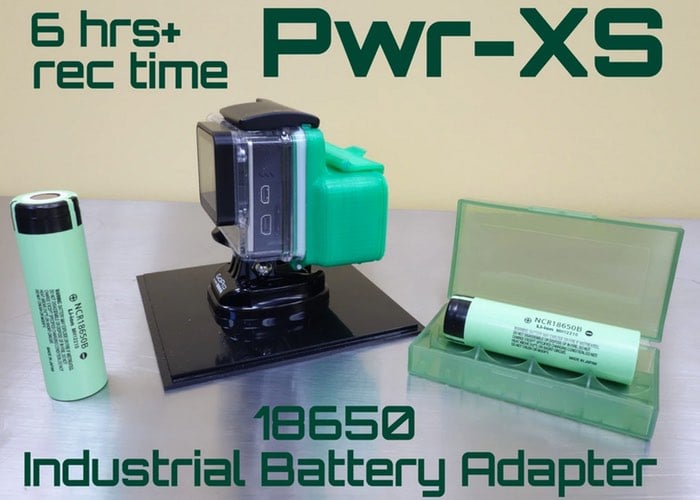 GoPro action camera users that are looking for a longer battery life to make sure they never miss that all-important shot, may be interested in a new GoPro battery adapter which has been designed by Cortex R&D based in Canada.

The GoPro battery adapter is apparently the very first to support the powerful 18650 cell format and is capable of adding an additional three hours of HD recording per cell and are contained in a fully waterproof casing. Watch the video below to learn more about its design and capabilities to extend your GoPro action cameras battery life.

The Pwr-XS project was born in April 2015, after I decided that I had spent enough money on batteries that just wouldn’t satisfy my needs. Being part of an off-road motorcycle club in the Montreal region, we often organize long trips that can last several days. On a typical day, it’s not unusual to keep riding for 8 hours or more. Nobody wants to miss those precious, beautiful, funny, exciting, thrilling or sometimes dramatic moments. That’s why we need long duration batteries, along with the GoPro’s looping mode, so we can forget about them and focus on the present moment.

When I sat down to see what other options were offered on the market, I was pretty disappointed with what I found out there. Who wants cumbersome cabling, USB connectors requiring holes in the case, bulky bricks, or expensive customs batteries? Then it came to my attention that there was a very powerful off-the-shelf battery that would be perfect for the job: The mighty NCR18650B lithium-ion rechargeable cell from Panasonic. The same ones Tesla use in their Model S. Looking at the specs, dimensions, robustness and price of those cells, and since no one offered any adapter to use them on the GoPro, I decided to marry them both together.

For more information on the new GoPro battery adapter casing jump over to the Kickstarter website for details and to make a pledge.