As if you didn’t already know you were receiving way too much email, Google has this week launched a new Gmail Stats app for Gmail which allows you to view your email messages and replies in more details.

The Gmail Meter is an Apps Script which runs on the first day of every month and sends you an email containing different statistics about your Inbox, such as volume, daily traffic and traffic patterns to name a few. 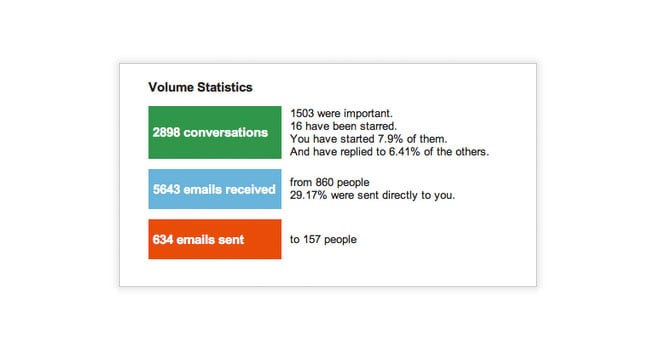 Gmail Meter is an Apps Script script that lets you analyse your Gmail Inbox, and is easy to setup, check out the video after the jump.

“Volume Statistics show you the number of important and starred messages, the number of people who sent you emails, and more. Volume statistics can be very useful in determining how you are using email efficiency tools like Priority Inbox.

Daily Traffic gives you an estimate of when you receive messages and when you send them during a given month. For example, in the graph below you can see how the peaks in my “Sent” curve indicates that I write emails in spurts.”

For full details on the Gmail Stats script jump over to the Google website for more information.