The innovative Google Glass eyewear has this week received a new application called Blue which has been designed to provide users with real time Baseball statistics as they watch the game.

Using the display on the Google Glass devices users can see real-time statistics about the game without the need to listen to any radio or TV stream for the Baseball game. 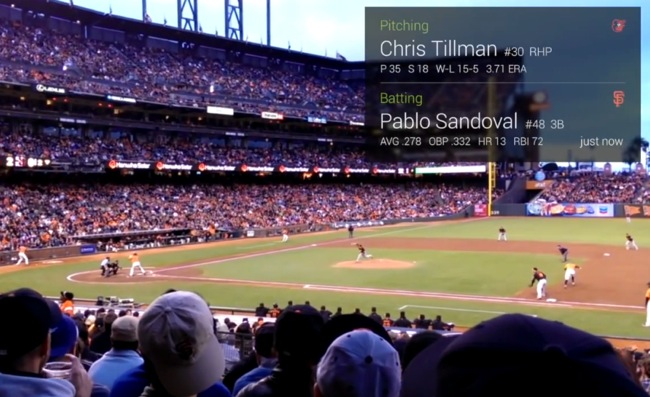 “It’s significantly more fun to attend a real baseball game instead of just watching it on television. But sometimes when you’re sitting at the ballpark, something slightly confusing will happen on the field and it’s never explained out loud. Maybe an umpire makes a call and it’s not entirely clear what happened. TV broadcasts have the advantage of commentators who can explain what’s going on.

That’s where Blue comes in. Blue uses geolocation to figure out which ballpark you’re sitting in. It knows who’s playing and automatically starts presenting data to you as the game unfolds — stats for every player and pitch, even play-by-play descriptions. Watch a pitch fly by, then Blue will tell you its speed and type. Wondering what call the umpire just made or why that runner got sent back to first base? Blue will let you know.”

Google Glass is also equipped with a 5 megapixel camera that can record HD video in 720P, together with 12GB of internal storage for apps, files and media that is synced with Google’s Cloud Storage, as well as connectivity provided by with Bluetooth and WiFi. For more information on the new Google Glass Blue app jump over to the Paper Model Plane website for details.