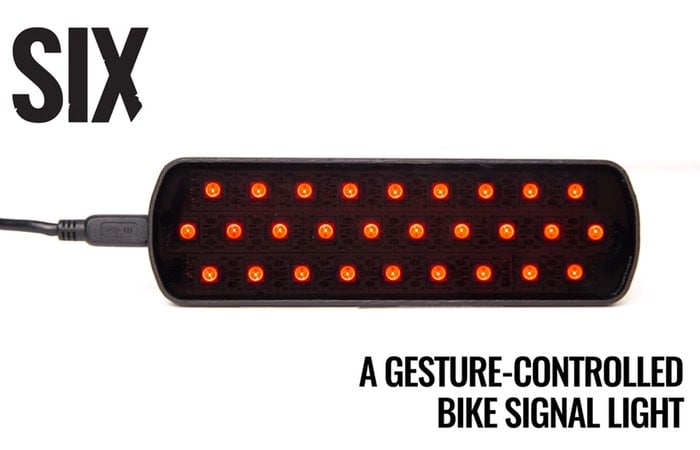 Cyclists looking for a safer way to indicate the direction they will be taking both at night and during the day, may be interested in this new gesture controlled bike signal light that has been created by Pax Cultura Studios based in Toronto Canada

The bike signal light named SIX, has taken to the Kickstarter crowdfunding website this week to raise CAD$8,000 to make the jump into production, check out the promotional video below to learn more about its features and functionality.

SIX has been created with the aim to drastically reduce the amount of night-time accidents and offers an easy gesture controlled signal light that can be fitted to any pedal bike. Its creators explain a little more about the bike lights inspiration and design.

Two of our teammates were struck by vehicles. In both cases the car driver mentioned they were unaware the cyclist was turning despite their hand signalling. Nighttime riding is dangerous for several reasons, but two stand out as the most significant:

– Firstly, reduced visibility hampers communication between cyclists and drivers.
– Secondly, cyclists commonly suffer reduced confidence during night rides.
– No matter how the factors are analyzed, just shy of 40% of fatal bike accidents occur when the sun is down (in Toronto, Canada).

SIX is a gesture-controlled bike signal light, and with it we aim to drastically reduce the amount of nighttime accidents. Having a signal light both increases visibility and road confidence when it matters. Having a pocket-sized unit, which pairs with any wearable watch, allows you to keep the light close and ensure it’s never lost. With funding, SIX will support many wearable devices; come with a gesture-recognition clip that sits on the seam of a jacket or shirt; and promises to notify when there’s low battery, or when it falls out of range (or perhaps off of a bike). SIX may be the last light you ever buy.

For more information on the new SIX bike signal light jump over to the Kickstarter website for details and to make a pledge from $175 for an early prototype version via the link below.