Gamera II the human powered helicopter has set a unofficial altitude record this week in its bid to win the $250,000 Sikorsky Prize money for creating a human-powered helicopter that can can reach and stay above 10 feet for one minute.

The Sikorsky Prize has been unclaimed since 1980, watch the video after the jump to learn more about the Gamera II project and see it in action taking off under human power. 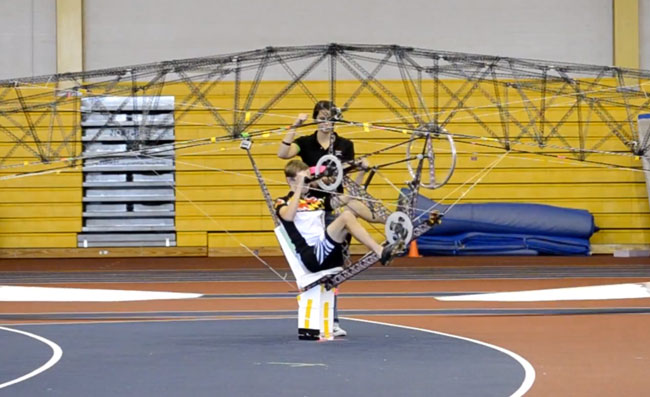 Henry Enerson was the pilot and pedal power for the initial flight which went ahead without a hitch, and looks as though Gamera II is on course to secure the $250,000 Sikorsky Prize shortly.

“Team Gamera is back and flight testing their modified version of Gamera II Human Powered Helicopter at the PG Sports and Learning Complex in Landover, MD.

With new pilot and incoming UMD Freshman Henry Enerson in the cockpit, a maximum altitude test flight was attempted. Needless to say we were not quite expecting what happened next. Henry smoothly pedaled Gamera up to just over 8 feet (2.5 meters) altitude and had a controlled descent for a flight time of about 25 seconds. This is not an “official” record but is certainly the highest a human powered helicopter has ever reached.

Our goals are to continue flight testing to achieve a 3 meter (10 ft) altitude as part of the AHS Igor I. Sikorsky Human Powered Helicopter Competition (‘The Sikorsky Prize’). Stay tuned to this youtube channel as more historic flights are achieved and posted! “