Check out this fun t-shirt, The Game Over Mushroom T-Shirt. 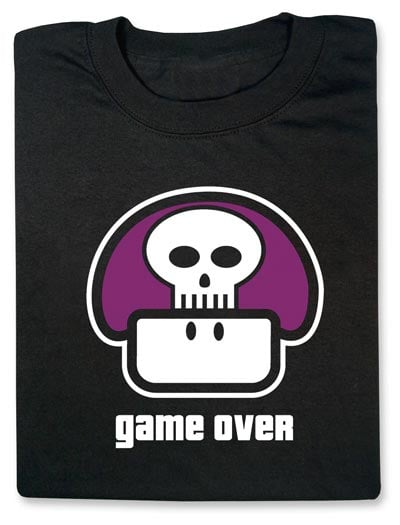 Today’s vocabulary word is “mycetism,” which Wikipedia defines as the “deleterious effects from ingestion of toxic substances present in a mushroom.” Good word to know, especially if you’re playing one of the Mario games. Just as in real life some poisonous fungi cause mild gastrointestinal distress and others cause internal organ failure, the effect and appearance of Nintendo’s poison mushrooms varies from game to game. Mario’s reaction to the poison mushroom can range from shrinkage to death. Death would be our least favorite effect.

So there are poison mushrooms that are all-green, green with purple spots, dark red, brown…. We like the purple top with the skull. There ain’t no two ways about that. There’s no, “Hey. I wonder if this mushroom is friendly.” It’s got a SKULL on it. It doesn’t want to play with you. But that’s okay, cause we do.

The Game Over Mushroom T-shirt is available to buy online for $18.99 from ThinkGeek.