This month the Fujitsu has unveiled a new prototype gestures control device they have created in the form of a finger glove style glove that can be worn by the operator on their hand.

Fujitsu Laboratories have been developing the new gesture control glove, and equipped it with Near Field Communication (NFC) technology and a gesture-based input control interface. 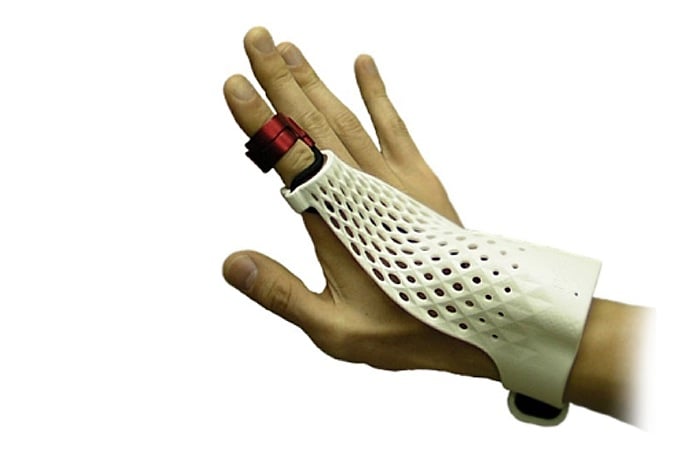 Providing the ability to control other devices when maybe a touchscreen or other control interface is not available. Fujitsu will be showcasing their new prototype during next week’s Mobile World Congress 2014, running February 24-27th in Barcelona. Fujitsu explains a little more.

“Fujitsu Laboratories has developed gesture-recognition technology that functions reliably in multiple tasks and postures without being awkward. Gesture-recognition accuracy is largely dependent on the ability to distinguish between gestures and normal arm movements during the course of work as well as variations in gestures between individuals.

This recognition technology takes note when the wrist is in a dorsiflexed position, where the hand rotates back, a movement that is not common in everyday tasks, and activates on that position, so that it can distinguish between normal arm movements and gestures. It also defines gestures based on the shoulder as the center of a coordinate system. This accommodates variations between individuals and allows gesture-based inputs in a variety of positions without awkwardness.

Wearable devices need to be comfortable without placing a burden on the user’s body, and for that reason, they cannot have bulky batteries. Accordingly, low-power operation is a prerequisite. For the glove device, by equipping the operator’s finger with a touch sensor and activating the NFC tag reader only for the moment the object is touched, power consumption is able to be kept low.”

For more information on the new Fujitsu finger based gesture control device jump over to the Fujitsu website for details.