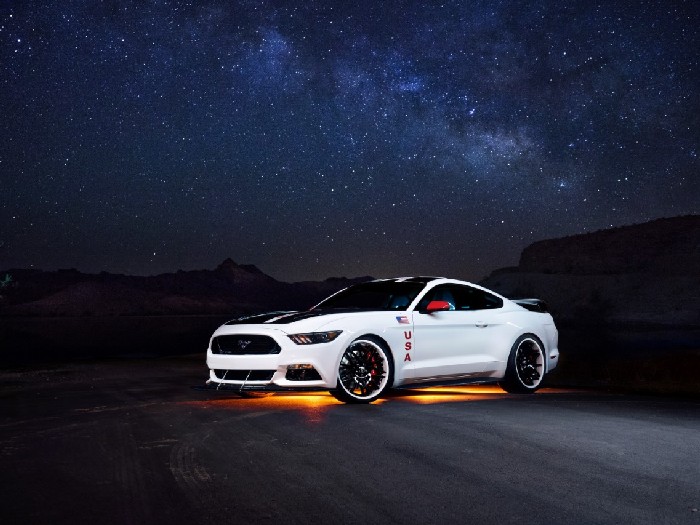 Ford has created a special edition 2015 Mustang to celebrate the Apollo spaceflight program. The special Mustang will be donated to the EAA youth aviation education program, including the Young Eagles. The auction will take place July 23 at the EAA AirVenture in Oshkosh, Wisconsin. The special car that will be auctioned off is based on the 2015 Mustang GT.

The car packs a 5.0L V8 under the hood and has a glossy white exterior matched with back two-tone paint. The car also has a carbon fiber front splitter, rear diffuser, rocker moldings, and accent treatments. It also has orange colored LEDs underneath representing the heat generated entering the atmosphere.

Under the hood, the car is far from stock with a Ford Performance supercharger packing 627hp and 540 lb-ft of torque. The car also has a special X-pipe with side and rear exhaust, sport-tuned suspension, Brembo brakes with 6-pistons, and custom Forgiato 21-inch wheels. The very first custom Mustang Ford donated to the charity sold for $500,000 in 2008. There is no word on how much this Mustang is expected to sell for, but it will be a lot. All of the money will go to the charity.