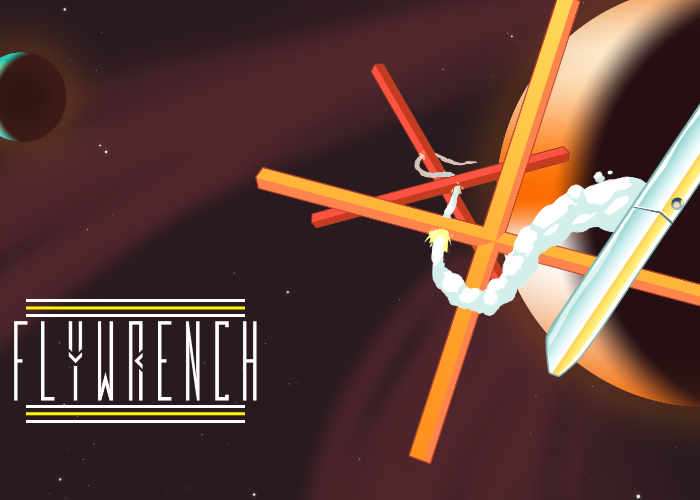 Developers Messhof have today announced that their new game Flywrench will be launching on the Sony PlayStation 4 in a few days time on February 14th, 2017.

To whet your appetite ahead of the game’s launch a new gameplay trailer has been released showing exactly what you can expect on the PlayStation platform. Kristy Norindr Co-founder of developers Messhof explains a little more about the unique game.

Flywrench is a tough-as-nails, masorcore-ish game that’s somewhere between a platformer and a physics puzzle. We’ve been working on it since 2007 if you can believe it — you might even have played Mark’s early prototype version of the game! If you play games like Team Meat’s Super Meat Boy (actually, Flywrench was a playable character!) or Roll7’s OlliOlli, then this is right up your alley.

Your character is a white line. No, seriously, you are a tiny white line. You are a tiny white line ship. If you don’t press anything you will drop to the bottom of the level and explode! Don’t do that. You can flap to stay aloft. Left and right adds momentum each way. You can do a barrel roll or 10, but you won’t be able to control your ship in this mode. Each move changes you color — while flapping, you’re red. If you’re rolling, you’re green. If you aren’t doing either, you’re white.
Obstacles come in a bunch of different colors, but if they’re one of the three that you can switch to then you can phase right through it untouched. It’s a little different, but you’ll get the hang of it right away. At AGDQ this past year there were some incredible Flywrench full story runs that were nearly flawless!

There are 199 levels and they come at you with the quickness. Flap, spin, and bounce through all kinds of tricky color coded obstacles and into the exit. We spent a lot of time tuning the controls just right, so when you die (Which you will… often) you’ll know it was all your fault. Bad gamer, bad!

In addition to the main campaign, we’ve also included a Time Trial mode so that you can race against players globally. Also — and this is only available on PS4, we’ve included a whole new pack of “Asteroid” levels in Time Trial. They’re fierce.

I may be a bit biased, but this is pretty much the best game soundtrack ever, so far (We are working on some killer music for Nidhogg 2!). Daedelus, who we were lucky to work with on OG Nidhogg, wove together an awesome soundtrack from some of the best producers around like Machinedrum, Baths, Dntel, Sweatson Klank, and many more. You can actually listen to the soundtrack in-game through an old school “Sound Test” screen.