Mozilla has this week rolled out their new Firefox Android 25 beta release which is now available to download from the Google Play Store for testing.

The new Firefox Android beta release version 25 brings with it the ability for users to guest browsing, which enables users to seamlessly share Firefox on their mobile device with friends and family. 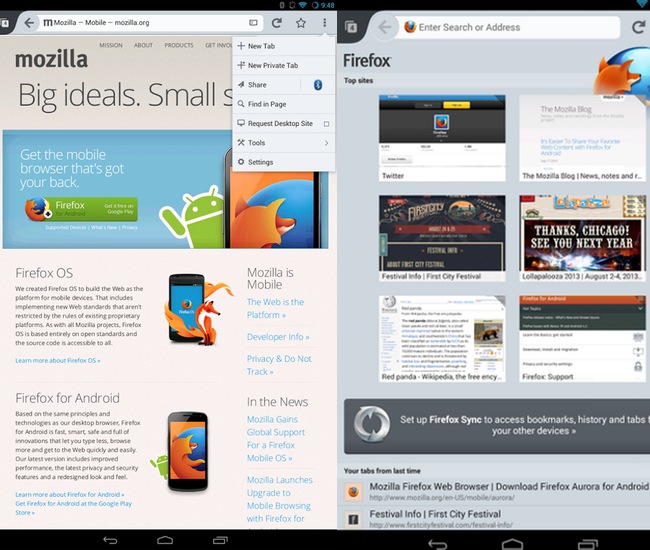 Together with a new user interface design as well as new development tools such as remote debugging and SkiaGL performance improvements, providing a faster and enhanced Web experience.

– Guest browsing: Guest browsing lets the owner of an Android device log out of his or her current Firefox session (effectively protecting history, bookmarks and open tabs) to enable a guest user to surf the Web on Firefox. When the guest is done, he or she simply selects to end the session, and the browsing data from that session will be deleted. From there, the device owner’s session is restored.

– Set wallpaper images and contact photos: Users set any image as their wallpaper or assign it to a contact directly from the Web page they are viewing. Simply press and hold the desired image to bring up the Context menu and select “Set image as” to customize your device with an image from the Web.

– Update to Settings menu: The Settings menu has a new look that makes it easier for you to customize Firefox. The menu now groups similar settings together under categories like Sync, Customize and Privacy, so users can configure their Firefox settings more intuitively.

– Page actions support: Add-on developers can designate a “quick-action” to the user experience via an icon on the Firefox URL bar. This addition enables users to quickly tap into the functionality of their favorite add-ons, regardless of where they are on the Web.