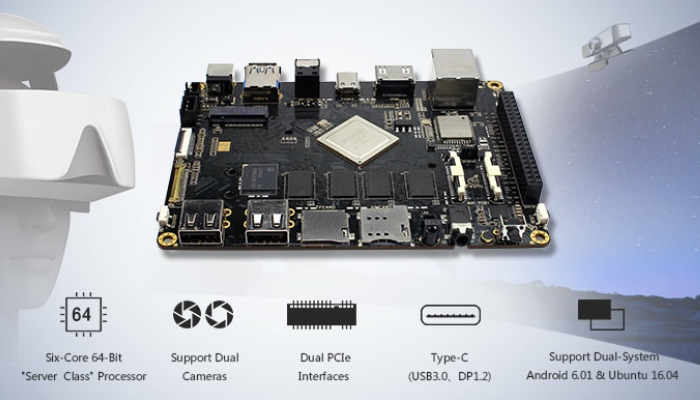 Developers or hobbyists looking for a new high-performance single board PC system may be interested in a new piece of hardware which has this week been launched by Kickstarter in form of the Firefly RK3399 6 Core 64-bit PC.

The open source platform is capable of dual booting both Android and Linux operating systems and is equipped with a number of powerful features which can be used for virtual reality applications and more.

The high performance open source platform is also equipped with support for dual cameras and is equipped with an ARM Mali-T860 MP4 quad-core graphics processor.

As a new generation of the best open source platform for Firefly, Firefly-RK3399 is equipped with a six-core 64-bit “server class” processor Rockchip RK3399, and with 2GB/4GB DDR3 and 16G/32GB eMMC, as well as increases PCIe 2.1 M.2, DP 1.2, Type-C, USB3.0 and other high-performance data transmission and display interface. The powerful performance of Firefly-RK3399 will bring a milestone change to VR, panorama shooting, visual recognition, server, 3D and other cutting-edge technology.

Firefly-RK3399 uses the nuclear architecture ofdual “server class” core Cortex-A72 and quad-core Cortex-A53, the frequency up to 2.0GHz, and the Cortex-A72 delivers up to 50% more performance at the same frequency as Cortex-A57, while reducing power by more than 15%.

For more information on the high-performance hardware jump over to the Kickstarter website for full specifications and to make a pledge from just $139 for earlybird backers, with shipping expected to take place during March 2017.