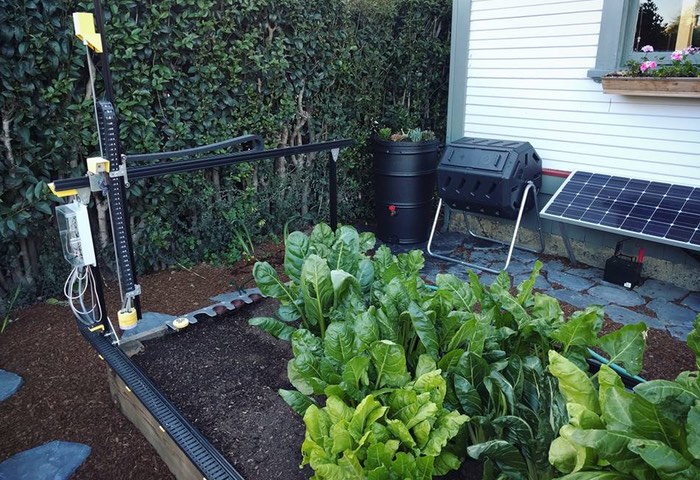 If like me you are lacking green fingers but would like to be able to grow your own vegetables you may be interested in a new open source CNC farming robot that has been created using Arduino hardware and awesome programming, called FarmBot.

The FarmBot Genesis farming robot has been created to grow food from seed and is capable of making sure that the crops are watered precisely during their growth. Check out the video below to learn more about this awesome three axis farming robot which will be available to preorder in July 2016.

The CNC robotic farmerIs complete with its own software and mobile applications to allow you to easily design your crops and also monitor their health and maintenance. The creators of FarmBot explain a little more about what you can expect from the system once it becomes available

Graphically design your farm by dragging and dropping plants into the map. The game-like interface is learned in just a few minutes so you’ll be growing in no time. Plants are automatically spaced and growing regimens can be applied upon planting. Build complete regimens for taking care of a plant throughout its lifetime by scheduling sequences to run when a plant is a certain age. Regimens can be reused, saving you time and effort during replanting.

Quickly and easily create custom sequences of operations to take full advantage of your hardware – no programming is required. Simply drag and drop basic operations and other sequences together, adjust the parameters to your liking, and save. Move FarmBot and operate its tools in real-time with the manual controls. Scare birds away from work or next time friends are over, pull out your phone for a quick and impressive demo.

For more information on the new Farmbot Genesis jump over to the official website for details, specifications and ordering details via the link below. If you like making Arduino projects you may enjoy building your very own Arduino wind speed meter that requires just basic Arduino skills.