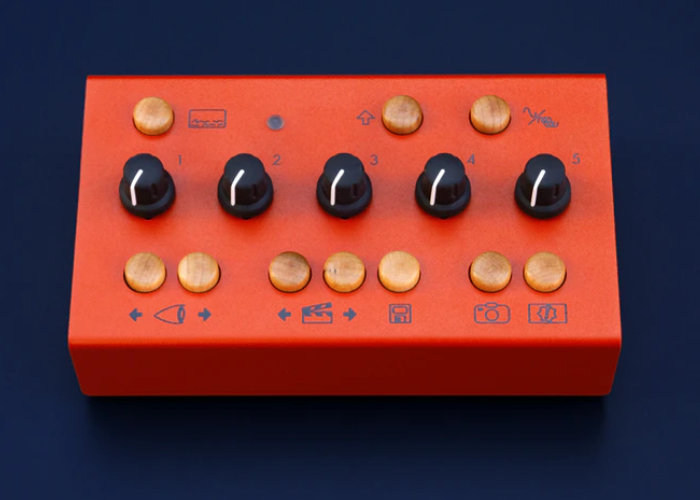 Musical instrument makers Critter and Guitarihave taken to Kickstarter to launch their new EYESY video synthesiser created to enable you to easily make visuals from your music. The EYESY understands MIDI, and the controls on the EYESY may be automated by sending MIDI controller messages from a sequencer or your favorite performance software. Program Change messages may also be sent to select your saved scenes

Check out the demonstration video below to learn more about the small orange box which is now available via Kickstarter with early bird pledges from $295 or roughly £239, offering a 25% discount off the recommended retail price. If all goes to plan worldwide shipping is expected to take place in a couple of months time during June 2020.

“We’re Critter & Guitari. We make musical instruments like the Organelle™ and Pocket Piano. We’ve also made video synthesizers like the Video Scope, Rhythm Scope, ETC. We are happy to announce the EYESY video synth! The EYESY is the next step in the evolution of our video synths. Its closest relative is the ETC, but the EYESY has a lot more to offer!”

“The EYESY makes it easy to create visuals from your music. Simply plug it in and start creating. But don’t be fooled by the simplicity of the EYESY, there are many features and goodies hidden inside. Whether you are creating live visuals, working on a music video, or want to program your own graphics, the EYESY will become an indispensable tool.”

The EYESY comes with numerous pattern generators called modes. “Navigate the modes using buttons, and then tweak their visual appearance using five knobs. The modes respond to audio input in various ways; from smooth undulating patterns to rapid fire animations. The controls allow you to effect various elements of the patterns and colors. There is also a setting that allows the graphics to pile up in vibrant collages”.