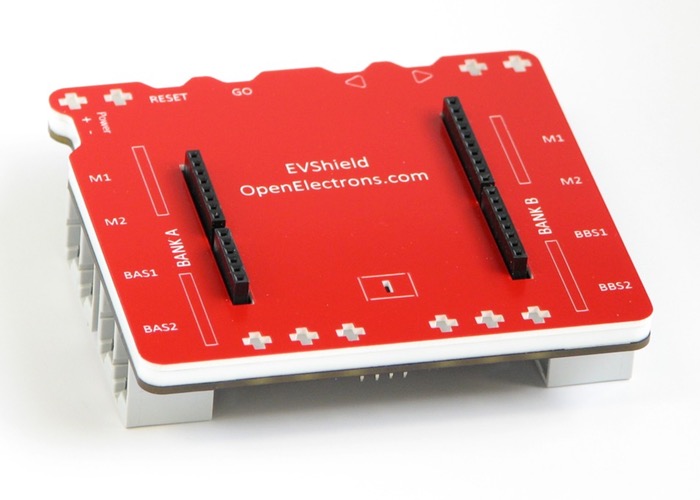 Makers, developers and hobbyists that are looking to build robotics projects using Lego EV3 components, may be interested in a new Arduino shield that has been designed specifically for EV3 motors and sensors and has been created by OpenElectrons in the form of the EVShield.

The creators of the EVShield say the devices Arduino library supports all sensors and motors to make building smarter robots easy with EVShield. Watch the video below to learn more about the EVShield project and see it in action.

The EVShield project is currently over on the Kickstarter crowd funding website looking to raise just $1,600 pledges go in to manufacture, with pledges starting from just $39.

“We always loved making robots, first with RCX then with NXT and now with EV3.  But we soon discovered that making robots and programming them with those bricks was no match to the powerful  open source Arduino.

With EVShield we can use all our Lego treasure to create great and smart contraptions. EVShield’s arduino library supports all sensors and motors. Building smarter robots with EVShield is a breeze.

EVShield only uses I2C port resources from Arduino and it has extensible connectors and so we can connect any other Arduino shield on top of EVShield. The EVShield library lets us connect LEGO sensors and several third party sensors seamlessly.  There are detailed examples for each sensor type.”

For more information on the new EVShield Arduino Shield jump over to the Kickstarter website for details via the link below.