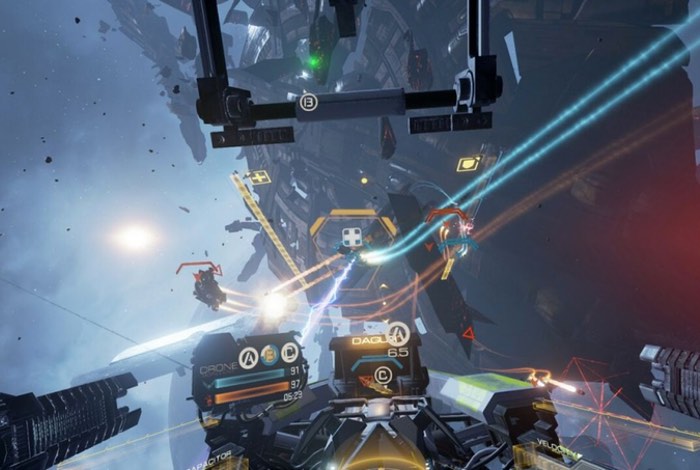 Gamers looking forward to the new EVE Valkyrie Carrier Assault gameplay mode that will be available to play on the Oculus Rift, HTC Vive and PlayStation VR console when sony officially launches the PlayStation VR hardware during October 2016.

Are sure to enjoy this new EVE Valkyrie Carrier Assault mode trailer which has been released by CCP Games and follows on from the announcement at the EVE Fanfest in Iceland, where the new game mode was officially unveiled.

Andrew Willans from CCP Games explained more at the reveal during the EVE: Valkyrie at Fanfest 2016 in Iceland :

If you approach from the front, you’ll find the heaviest layer of defenses—so lots and lots of machine gun turrets,” Willians explained. “So you’re a mad man if you go in through that entrance […] You can try over ‘the trench’, again there will be heavy defenses: machine guns, automated turrets, and also the opponent team are in full-on defense mode […] But there’s a pretty cool access tunnel in the back of the ship that leads straight to the core. Now the difference: there are less turrets to avoid, but it’s quite a tight kind of navigation to get through ‘the trench’. Once you get in there, and you get the cooling nodes destroyed, and you get the ability to get into the trench, it makes for a pretty exciting finale of the mission. It’s basically a tight, fast burn to the core of the ship.

Experience the next level of space dogfighting with Carrier Assault, part of the first free content update for the multiplayer virtual reality game EVE: Valkyrie by CCP Games!

Unfortunately no information on worldwide availability for the EVE Valkyrie Carrier Assault mode has been released as yet CCP Games, but as soon as information comes to light we will keep you updated as always.