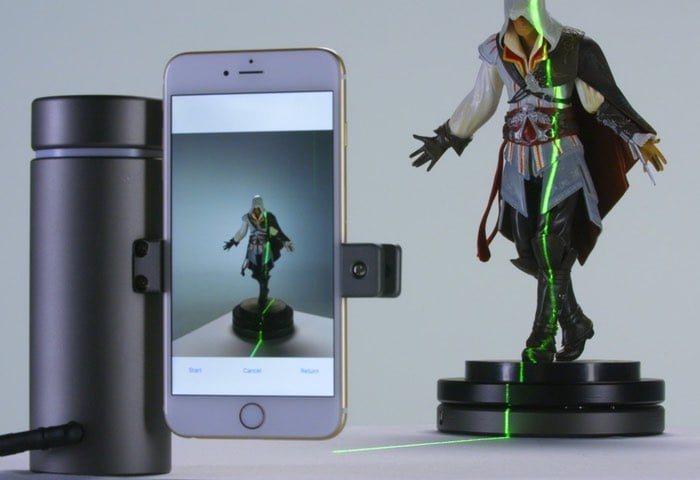 Back in August we featured the eora 3D smartphone 3D scanner that was preparing to launch its crowdfunding campaign via Kickstarter.

This week the campaign has launched and already blasted past the teams required 80,000 pledge goal raising over 140,000 in just the first few days thanks to over 532 backers.

Priced at an early bird special price of just $199 the smartphone 3D scanner is capable of producing high precision 3D models from real-life objects using the processing power of your iPhone device. Its development team explain more about the eora scanners design, inspiration and functionality.

When we began work on the eora 3D scanner, our goal was to make sure it was extremely precise and easy to use. We considered every element that defined professional 3D scanners – the processors, cameras, build quality, turntable design, projected light scanners and laser based scanners.

Sure, there are all kinds of 3D scanners today — from projected light scanners that connect via a tablet that are handheld and fast, to traditional flat-bed/turntable scanners that are too often slow and stationary — but none are accurate, unless you have $15,000 to spend. So we challenged ourselves to design and engineer a 3D scanner that not only was extremely precise and accurate but also fast, portable and affordable.

The solution, it turned out, was sitting in our pockets. By harnessing the power and optics of a modern smartphone, we knew we could reduce our part-count and invest instead in the one part that makes high-precision scanning possible — a green laser.

For more information on the new eora smartphone 3D scanner jump over to the Kickstarter crowdfunding website where it is now available to pledge with prices starting at just $199.