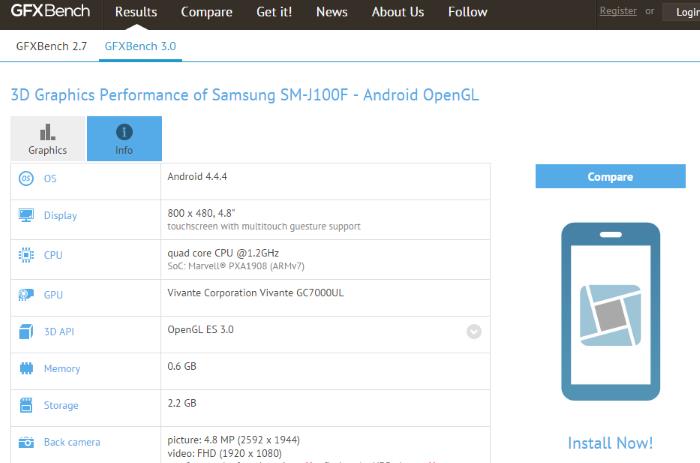 Samsung is working on yet another handset, but it seems they are focusing more on the budget-conscious users as they are far greater in number than those who just seek for a device with a best possible specifications.

With that said, it seems the Korean OEM is working on another entry-level specifications, and surprisingly, it features a 64-bit Marvell CPU.

It does make sense as 64-bit processors are going to gain more popularity in the coming years as Android 5.0 Lollipop offer support for them, thanks to ART system. Anyway, the handset with the 64-Bit Marvell chipset clocked at 1.2GHz was spotted on GFXBench. The alleged device rocks a 4.8-inch display sporting a resolution of 480 by 800 pixels and Android 4.4.4 KitKat as its operating system.

The handset will apparently come with 4GB of storage, 1GB of RAM, 5MP canera with LED flash for photos and videos, as well as a 5MP front-facing camera. The device is being tested with the ANdroid 4.4.4 KitKat, but it’s likely that Samsung will launch the handset with Android 5.0 Lollipop to make full use of the 64-bit chipset.