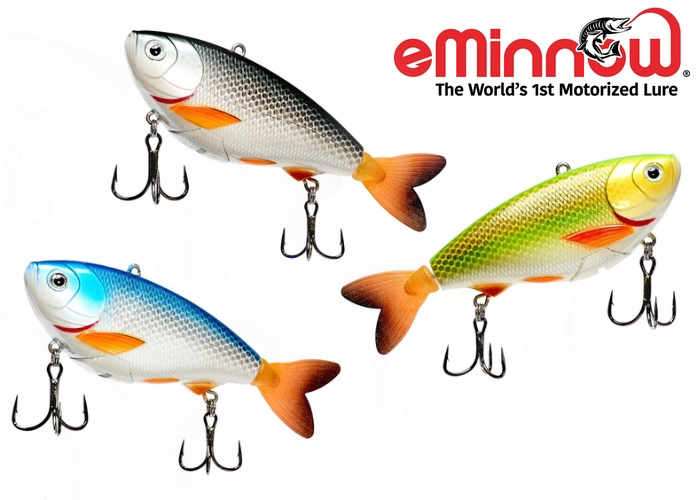 Fishermen looking to gain an edge over cunning fish may be interested in the world’s first motorised fishing lure which is aptly being named in the eMinnow.

eMinnow has this week taken to Kickstarter to raise the funds it requires to mass-produce the fishing lure which its developers say is the first and last fishing lure you will ever need.

Watch the demonstration video below to learn more about the mechanical and motorised movement created using the fishing lure which is now available to back with pledges starting from just CAD$15 for three fishing lures and 10 battery packs. eMinnow automatically starts as soon as it hits the water and stops when it’s taken out of the water, with the water completing the required circuit to start the motion.

The development team based in Victoria Canada explain more about the inspiration and design of the eMinnow motorised fishing lure.

Imagine a fishing lure that behaves just like a real bait fish, but without you having to constantly jig it or retrieve it to keep it moving. Well now there is… eMinnow is a preprogrammed fully motorized fishing lure that mimics the swimming movements and patterns, of REAL bait fish, including pauses, speeding up, slowing down and regular live action.

eMinnow lures are perfectly balanced and designed to attract predator fish not only by the realistic swimming action but also by the vibration and harmonic frequency of the constantly moving motor. Game fish like, Bass, Pike, Muskie, Trout, Walleye, Perch, Crappie, even Salmon simply can’t resist  eMinnow. We have extensively tested eMinnow over the past 2 years and its has proved to be devastatingly effective.

Fishing is an awesome pastime, but the fun can often be quite drawn out when there is nothing biting your line. You can only be patient for so long, until you are ready to pack up and call it a day. eMinnow is the solution! It’s “the most effective lure EVER, lasts MUCH longer that live bait”, makes a modulated harmonic clicking sound that predator fish simply can’t ignore, and keeps a realistic movement to lure the target fish in. In fact, live bait fish often expire or stop moving after 10 or 15 minutes, eMinnow keeps going ! The design and materials are state of the art and the battery operated movement is timed perfectly.