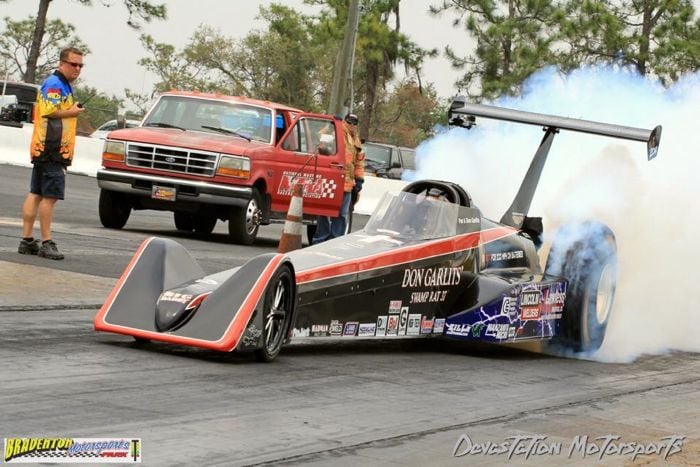 Electric vehicles are becoming more and more popular, and now we have a video of an electric dragster that has reached a massive 184 MPH.

The SR-37 dragster was driven at Florida’s Brandenton Motorsports Park last week by 82 year old Don Garlits, and after half a dozen quarter mile runs it reached a massive 184 MPH.

“Big Daddy” Don Garlits and the SR-37 “Quest for 200 MPH on Batteries” Dragster Team traveled to the historic ¼ mile dragstrip at Bradenton Motorsports Park, FL yesterday, April 30, 2014, to shake out the ultimate battery-electric (BEV) digger. This was the first full run test for Garlits and team. It was also the first opportunity since SEMA-2013 for the public to see the gleaming SR-37 after the team spent the past several months completing and installing the 2014 powerplant of Lawless Industries 6-pack of GE Motors, Manzanita Micro “Zilla” Controllers, and HighTech Systems LLC lithium polymer (LiPo) battery packs.

Don Garlits first trial run reach 129 MPH, this run was done at only 30 percent power, and his final run hit a massive 184.01 miles per hour, have a look a the videos below.

The team behind this electric dragster have been working for the last two years to get this EV to hit a top speed of 200 MPH, and the vehicle has a giant lithium polymer battery pack that has 1,500 kilowatts of power and more than 2,000 HP.