We understand the frustration of seeing fifteen years of work get torn to shreds at the hands of game reviewers. There are people out there who have been working on this game for their entire adult lives. But we will never ever understand the rationale behind PR companies blacklisting sites or writers based on negative reviews. Publicly threatening to do so even if you don’t plan on following through is doubly puzzling. 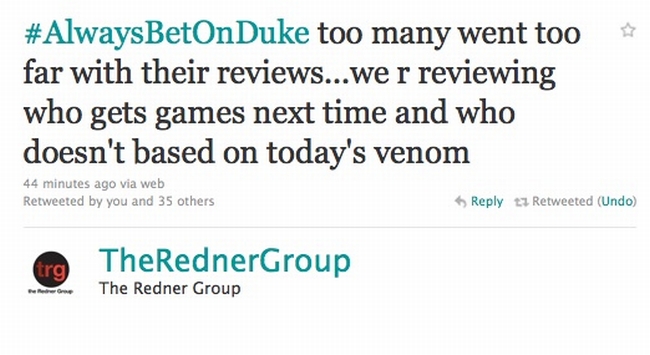 “Too many went too far with their reviews…we are reviewing who gets games next time and who doesn’t based on today’s venom,” read a tweet sent out by the Redner Group, the PR company handling the launch of almost but not quite vapourware title Duke Nukem Forever, which famously spent a decade and a half  in development.  Hell, we don’t think even George Broussard was that bitter and he sunk tens of millions of his own money in the thing.