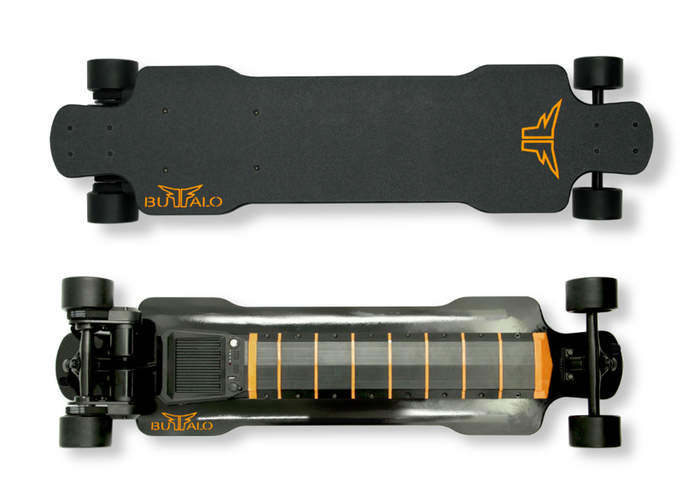 Buffalo Technology based in Los Angeles California has created the world’s first dual motor electric skateboard which is capable of switching from single to dual 1200 watt motors or vice versa when required as well as a regenerative braking system.

The innovative Buffalo F1 electric skateboard has this week launched via Kickstarter to raise the $50,000 the team requires to take the bamboo electric skateboard into production. Check out the video below to learn more about its unique dual motor system.

Electric skateboards work best in cities with a very complex network of roads and transport systems. It lets you go from point A to point B in a matter of minutes without breaking a sweat. It also gives you the chance to complete your commute in areas where trains or buses don’t usually go. And the best part is, it goes through the narrowest of streets and paths, making it easy to avoid traffic. While there have been lots of powered boards available, Buffalo is trying to change the game with its dual-powered motor system that gives you the needed boost at your disposal.

Built to be tough, Buffalo comes with durable parts as standard. Dual electric motors rated at 1200 watts each deliver direct power to the base wheels, able to propel Buffalo forward at up to 38 km per hour. The elastic deck board offers a stable yet compliant ride even on rough surfaces – this is made possible by a bending mechanism that works similar to an expansion joint on the highway. The longboard is made from flexible yet sturdy bamboo to save weight while keeping its durability over time. It’s even tested to work in wet and gravel surfaces, so it’s really up to you where should you go next with this powered board.

If you live in a hilly terrain, Buffalo will make it easier for you to roam around the streets. It’s rated to ride roads up to 22% incline – helpful for everyday hilly streets or just ramping up. With a built-in regenerative braking feature, you can go further whenever you press the brake on its handheld controller. This feature allows the battery to recharge as you brake, so it’s even more convenient to stay further away from the socket much longer.

Jump over to Kickstarter for full specifications and to make a pledge from $299 for earlybird backers with delivery expected to take place next month during December 2016.