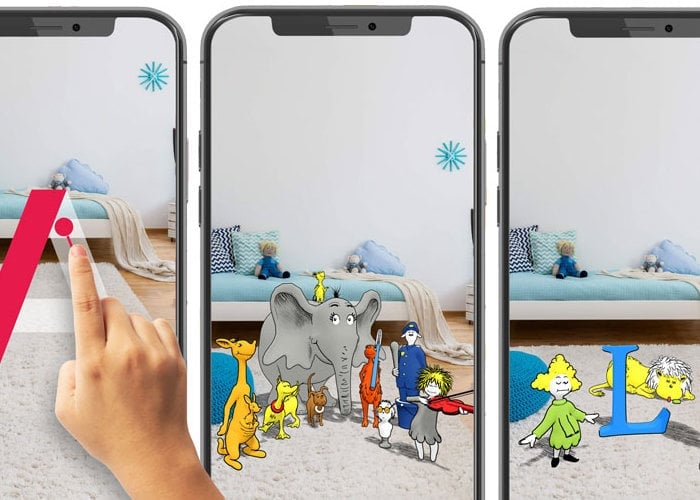 Fans of Dr Seuss’s are sure to be interested in the new augmented reality book now available for both Android and iOS devices bringing the world of Dr Seuss to life using augmented reality directly from your smartphone. “Designed to enhance the way children learn to read, Dr. Seuss’s ABC – An Amazing AR Alphabet! app based on the bestselling book Dr. Seuss’s ABC encourages children to learn their ABCs in a fun, engaging, and unexpected way. From Aunt Annie’s alligator… to Zizzer-Zazzer-Zuzz!

“Effortlessly combining play with learning, the magical imagination of Dr. Seuss is brought to life in the Dr. Seuss’s ABC – An Amazing AR Alphabet! app. With every character from the pages of the book Dr. Seuss’s ABC have been meticulously recreated in 3D and presented in AR for the very first time.”

– Story Mode: Users are led sequentially through the alphabet A through Z and tasked with tracing the letters while interacting with fun, animated characters appearing in AR directly in front of them.
– A to Z: The “Chapter Select” option enables kids to go directly to their favorite page of the book to trace letters, listen to fun narration, and interact with Dr. Seuss characters like the Hen in the hat and the Fiffer-feffer-feff!
– Sandbox: This mode reflects an open-world feature enabling the user the ability to place several animated characters in the world around them in AR. Users can select any character from a list and, voilà!—each will appear in AR in the room with them.