Arsenal Firearms has this month unveiled a new addition to their range of handguns with the launch of the AF2011-A1 Double Barrel Pistol. Which is the first industrial double barrel semiautomatic .45 caliber pistol created.

As you can imagine the new AF2011-A1 dual barrel pistol features a number of custom parts, such as: single slide, the single frame, the single spur double hammer, the single grip safety, the single body double mainspring housing to name just a few. Watch the video after the jump to see the new pistol in action. 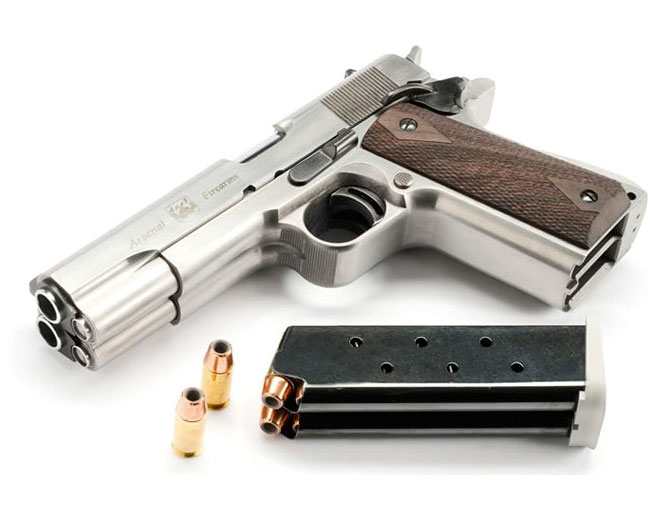 The new AF2011-A1 Double Barrel Pistol can be order in a number of configurations including either two independent triggers and one sear group or with 2 triggers permanently joined. Arsenal Firearms explains:

“The AF2011-A1 holds amazing and surprising target performance for the shooter: in fact, it will group all the 8 double .45 caliber rounds (16 bullets) held in the duplex, single columns magazines, in a target of the size of an orange at 15 yards and of a water melon at 25.

The stopping power of the AF2011-A1 is tremendous: 2 bullets for a total of 460 Grains weight impacting at 1 to 2 inches apart (depending on the distance of the target) will knock down a bull, while the whole 18 bullets, for a payload exceeding 4000 Grains, can be delivered to the target in about 3 seconds.”