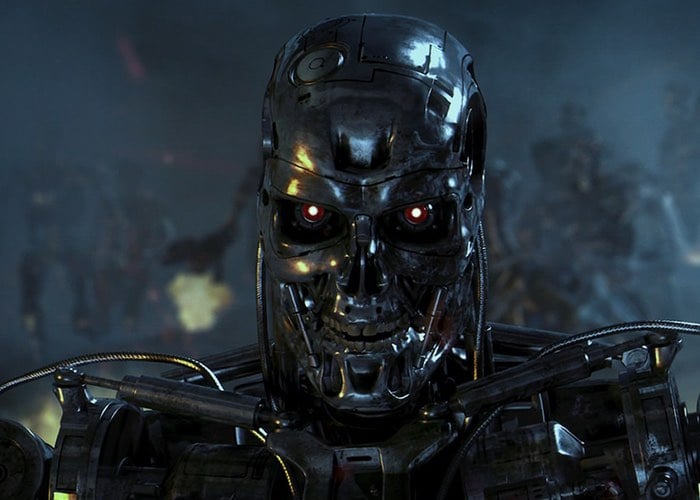 Fans of the Terminator movies are sure to enjoy this awesome full size Terminator T800 animatronic, that has been created and powered using Arduino.

The T800 has been built using a combination of paper, paper-craft techniques, cardboard and balsa wood, check out the video below to learn more about the construction process and see it in action.

Finally the building of the T-800 Model 101 animatronic is ended. This is about a full body’s reproduction in real scale. The manufactured is based on paper-craft technique, built with cardboard-resistant construction paper and balsa wood, equipped with a replica of the Original plasma rifle, also made with construction paper. The mechanics is basically comprised of a system voltage, levers and pulleys that function as reducing system to facilitate the work of servos on raising the torque, providing great stability and fluidity of movements. One of the most demanding parts of the mechanical design was the arm holding the gun. On the levers of the third kind that conform the shoulder joints and elbow, much weight is generated, so the servos and pulleys exert a force that achieve a torque of over 40 kg / cm respectively, to easily overcome the resistance that can offer the hand holding the gun, which when the arm is fully stretched, its length reaches over one meter long. The legs have no mechanical function, only for support. Its architecture is not completely rigid so the posture and the design of separate segments of the feet, adapt to the movements of the upper body to provide support and balance.

On the electronic matter, the heart of the project is the powerful and versatile 8-bit micro controller Atmega 328, which is part of the robot controller board, built on the model Arduino Pro. The code was made with the Arduino programming environment which allows to control the position, velocity and acceleration of the servo. For determining the angular position in some joints, the reading system of resistive variation is used, and in other cases a mechanical system of counterweight is applied. The energy is provided by a commercial power supply that provides 5 volts and 10 amps, plus also features a dc-dc boost converter with adjustable regulator (own design and construction), which collaborates with the best driving performance of some servos.

The inspiration for the mechanics is based on old designs like the knight robot by Leonardo da Vinci, some of the automatons by Pierre Jaquet-Droz, and the karakuri Japanese robots. The whole set design represents the fusion of old mechanisms driven by motors, electronics, and computers of this modern era, achieving a high quality performance. Because of the high costs of materials, cheap materials were used like sturdy cardboard and balsa wood. The project offered a number of challenges from the start, plus the time needed to complete the design and construction. Several pieces had to be purchased abroad and wait for them to arrive by mail, but thanks to God and the constant support of my parents Juliana and Kaled, my sister Sujaila and my girlfriend Brenmir, the project is completed.