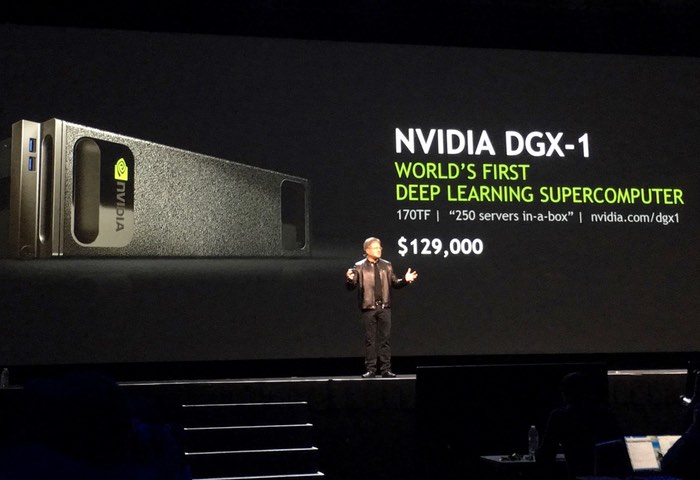 NVIDIA has this week unveiled its very first deep learning computer in the form of the NVIDIA DGX-1 which has been specifically designed to offer solutions for performance artificial intelligence applications.

The NVIDIA DGX-1 comes integrated deep learning software and development tools and hardware for quick, easy deployment says NVIDIA and delivers the equivalent throughput of 250 x86 servers and is priced starting from $129,000.

The system is based on NVIDIA Tesla P100 GPUs on the new NVIDIA Pascal GPU architecture offering those that can afford it one unit that contains 250 CPU-based servers, networking, cables and racks in a single box. NVIDIA explains a little more about their new artificial intelligence supercomputer :

The DGX-1 deep learning system enables researchers and data scientists to easily harness the power of GPU-accelerated computing to create a new class of intelligent machines that learn, see and perceive the world as humans do. It delivers unprecedented levels of computing power to drive next-generation AI applications, allowing researchers to dramatically reduce the time to train larger, more sophisticated deep neural networks.

NVIDIA designed the DGX-1 for a new computing model to power the AI revolution that is sweeping across science, enterprises and increasingly all aspects of daily life. Powerful deep neural networks are driving a new kind of software created with massive amounts of data, which require considerably higher levels of computational performance.

For more information on the new NVIDIA DGX-1 jump over to the official NVIDIA press release website for details.