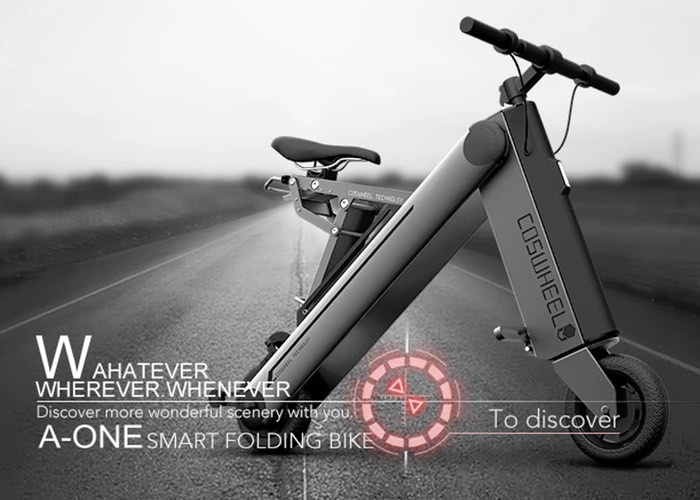 Coswheel has this week unveiled a new smart folding electric bike called the A-One which is been designed to be easily transportable and perfect for that morning commute to the train or just as a quick to set up extra mode of transport when you need.

The A-One can be ready to go in just three seconds and takes up minimal space once collapsed and unfolded providing a top speed of 35 km an hour together with three modes that can be used to extend the battery life even further.

Check out the video below to learn more about this new folding electric bike which is taken to Kickstarter to raise the $100,000 the team based in Hong Kong requires to take their design in to production.

Coswheel A-ONE, is the tool to solve all these problems. Weighing only 15.6kg, can drive for 45km continuously, A-ONE is a slim fit for a strong capability. The frame can be folded up in a second, easy to be carried around. You can drag it along the way, or easily lift up on stairs. Easy to put in the trunk or get into public transportation. It doesn’t take up much space, easy to park at anywhere you want. A-ONE can be folded up in 3 seconds and take up small space.Easy to put into the trunk and carry around, you can go anywhere you want.

Connecting the app for A-ONE, then you have smart travel as you go. Smart speed adjustment, GPS locating function embedded, recording your tracks when exploring the city. You can social and share with friends about your traveling along the way. A-ONE comes with strong power, allowing you to conquer steep slopes and rough roads. And there’s more than that, Here come costumed lights, electronic screen, together with smart driving lamp and safety tail lamp. Coswheel A-ONE, born for city travelling.

For more information on the new COSWHEEL Smart Folding Electric Bike jump over to the Kickstarter website for details and to make a pledge from $729 via the link below. Another electric bike to launch on Kickstarter this week is the Super 73 which offers an entirely different design that is equipped with a large 1000 watt battery.