Two clever guys from the Czech Republic have come up with a way to use the iPhone as a controller for a R/C Car. 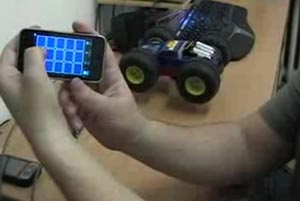 Josef Prusa and his brother have managed to use the iPhone’s accelerometer to control an old R/C car they had.

Controlling is very easy with the iPhone 3G. It has five buttons, four of them you can use for traditional ždriving and when you press the last one, it unlocks the accelerometer control in the same way as in many driving games available on AppStore.

Realization of this project did not take a long time, only one afternoon.