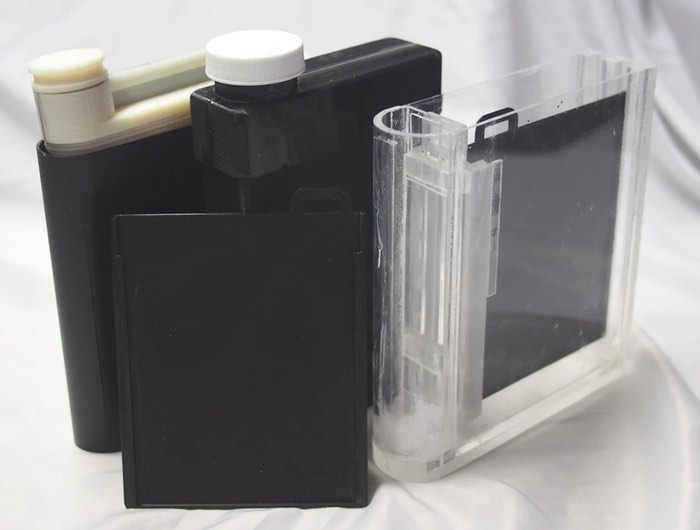 Photographers may be interested in a new compact paper film processes system that Timothy Gilbert has created and launched over on Kickstarter to raise the $27,700 it requires to go into production.

We were frustrated by the lack of an easy to use, affordable film processing system for large format sheet film. After several prototypes and lots of experimenting, we’re ready to launch the SP-445 processing system. It will process up to four sheets of 4×5 film in only 16 oz (475 ml) of solution.

After a lot of experimenting, (including some wacky ideas), we realized that the perfect solution was right in front of us: the standard 4×5 film holder. Everyone already knows how to load it and you don’t have to count grooves, (with your fingers in the dark) to make sure you’re sliding the film into the right slots. Just like your standard film holder, each holds two sheets and the tank will hold two film holders.

The lid just slides slides into place; then locks via the red button on top. You fill and drain the tank using the “spout” on the end. By redesigning the fill port and putting two sheets of film back-to-back, we significantly reduced the width of the tank. The current prototype requires 16 oz of solution.

For more information on the new SP-445 film processing system jump over to the Kickstarter website for details via the link below.