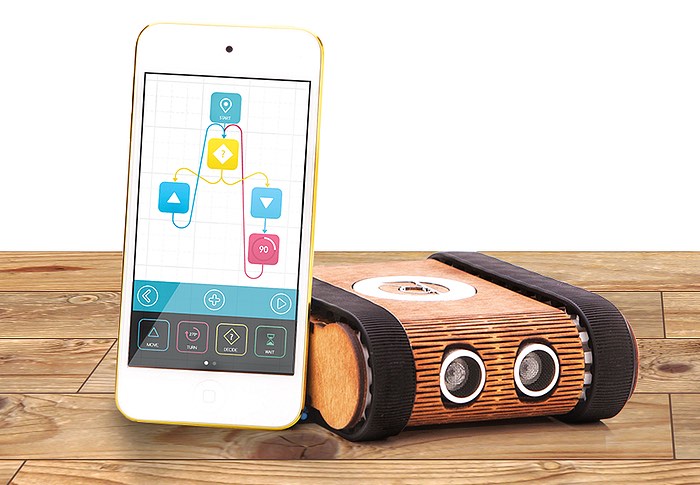 After launching back in 2013 and raising funds from a successful Indiegogo crowdfunding campaign earlier this year, the educational Codie robot is now available to pre-order for delivery in the first quarter of 2016.

The small smartphone controlled robot has been designed to provide a tool to teach children the principles of coding in a fun and engaging manner and all backers from the Indiegogo crowdfunding campaign can expect to receive their orders before the holiday season.

Codie has been designed to inspire children from the age of six upwards and provides a variety of different projects to continually challenge and introduce new complexity and programming tasks at appropriate times. The developers of Codie explain a little more :

Even the youngest can jump straight into playing with our intuitive application! Control Codie’s movements and go on adventures together. Codie provides countless hours of fun thanks to the infinite variability of the programming language. The app is designed to be challenging to facilitate creativity while introducing the principles of coding. Get to know the advanced programming structures with Codie and use them to create elaborate programs. Codie invites you to a world of connected play and beyond!

To avoid large programs become a confusing mess, we used a new approach: separated data operations. The also look the same as the action blocks, the difference is that the arrows now transfer data between the blocks. Every action block can have its data flow, and depend on different calculations for the parameters.

Codie has also this week taken to the stage at the TechCrunch Disrupt London event were the development team demonstrated features and functionality of the educational robot, For more details on Disrupt jump over to the Tech Crunch website via the link below. Or for more information on the awesome Codie robot jump over to the official website where the cute little robot is available to preorder from €199.